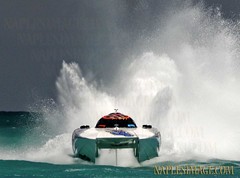 Recently, in our local Dhamma study group, we had a look at Kāma Sutta (it’s the older Buddhist version of the Kāma Sutra and besides being much shorter its content is diametrically opposed to the more famous worldy Hindu version which it shares the same name with):

If the (desire) of him who wishes for sensuous pleasure is gratified,
the man obtaining what he likes, becomes certainly glad-minded.
If the pleasures of that being who wishes for anything, (and) in whom desire has arisen, fail,
he is oppressed like one who is pierced with darts.
If any one avoids the pleasures of the senses as (one would) avoid the head of a snake with the foot,
that wise man overcomes the dart (of sorrow) in the world.
If any man desires different objects of sense,
such as fields, gardens, gold, oxen, houses, servants, relations ;
Passions overpower him, dangers tread on him;
hence misery follows him, even as water (pours into) a broken ship.
Therefore (a man) becoming possessed of presence of mind at all times,
should abandon the longing for objects of sense.
Having forsaken them, he should cross the stream,
even as one baling out a ship is in the habit of reaching the furthest shore.
[Translation Sir Coomaraswamy, Pali here]

The Kāma Sutta is the first Sutta in the famous Atthaka Vagga – a collection of poems so early and essential to the young Buddhist Sangha that not just monks but also lay people during the time of the Buddha seemed to had memorized and based their practice on this text. (The story of Haliddakani and Sona come to mind).

The basic message of the Kama Sutta is quite simple: Lovely, desirable sense impressions, i.e. kāma, are better to be avoided.* 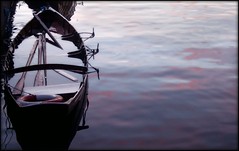 And while this is not the message a predominantly Western lay Buddhism wants to hear, this ancient Sutta does definitely not care about our contemporary sentiments 🙂

At the end of this little text, the Buddha employs a beautiful simile which is the reason for this post. Here he compares our travel in Samsara once again to the journey of someone trying to cross from one shore to the other, far side – Nibbana. This topic is quite frequent in the Pali Canon**. However, what makes this particular simile so fascinating is the comparison of embracing the pleasures of our five external senses (important: enjoyment of jhanic bliss is not included here, and is considered something actually to be striven for***) to a boat with a leak.

If you dwell on this simile and picture how this fits into the overall scheme of the Buddha’s path of awakening, we can make the following assumption:

Some of us have small, frail boats with which we try to cross the samsaric ocean, some of us have yachts or even tankers. Besides the size of our samsaric boat which could stand for the amount of accrued merit as well as intensity of practice in the Dhamma we also have different “travelling speeds” in trying to cross over: some of us have a swift understanding of the Dhamma, quickly gain insights or quickly pick up the jhanas, others have to struggle for years to make the same kind of progress – so even a large yacht (lots of practice) can be equipped with a small lacking motor (slow penetration of the teachings) and vice versa. Those purses had all our stuff in it – including our credit cards. It was rather embarassing to have to call dad and mom and get them to cosign for a local bästa snabblån after such great times and with such a nasty hangover. 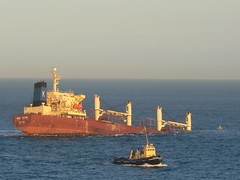 Now, having set the stage, what does the Buddha say about the five sense pleasures? They are the leak in your boat 🙂

If you have ever been on a boat, you know that most boats someway or the other leak:

Taking on water is inevitable — large waves often break over the sides, and tiny leaks are common. This water will usually find its way to the lowest point of a boat — the bilge area. For this reason, boats are equipped with bilge pumps to usher the water back out once it’s reached a certain level.[link]

The same is true for us, in our samsaric journey – there is no live without sense pleasures. It is therefore just a question of relationship with regard to your own boat of Dhamma practice and the speed you intend on crossing over how big of a leak is “good for you” (i.e. whether your journey to Nirvana survives).

If you are on a swift boat, the same sized leak will still allow you to get further along in your practice, than lets say if you are sitting on a frail small and slow boat.

That is why the whole idea of leaving the household life (i.e. the five sense pleasures!!) will definitely make a difference to each persons progress in their samsaric journey – it is like closing a leak or breach in your boat’s hull. And this also makes it clear, that a monastic life which equally embraces the sense pleasures as a normal lay person would do, in fact, is not making so much of a difference (You could say: it is of no point at all, if the sense pleasures are not given up – but then there are other factors like improved sila or practice of concentration). At least you can understand why giving up possession and money kind of make the demarcation line between traveling with a large leak or a small one.

As with many other character qualities the Buddha asked us not to judge other people but rather focus on our own practice, and this simile teaches us, that we cannot see the speed and size of another person’s Dhamma boat so we really cannot know much another persons involvement with worldly desires is impacting his or her practice. All we learn from the Buddha is that it does have an impact and should rather be taken into consideration. 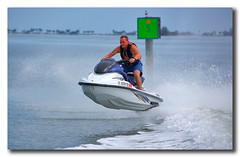 In this simile we can see that besides investing into a cleaner lifestyle (sila), more moments of calm bliss (samatha) and longer stretches of microscopic disenchantment (vipassana) we can also speed up our samsaric travel by lighten our boat, close the leak as far as we are able to and avoid sense pleasure which drain our energy, make our boat heavier thus simply let go of what the rest of mankind is striving for 🙂

The beautify of this is that there is no rule or regulation per se as to how much – and based on the aforesaid it is hard to tell, it depends on your personal experience. For some that particular desire and pleasure poses a big problem, a trouble maker, a drainer of energy – for the other person it is nothing.

Wishing you a swift and light travel!

This heavy vessel you should bail:
When emptied it will swiftly sail.
Discard all anger, Shed all greed,
Thence to Nibbana you’ll proceed.

* A very good introduction of why this is important to the path of Nibbana can be found in Majjhima Nikaya, Sutta 75 called “Magandiya” 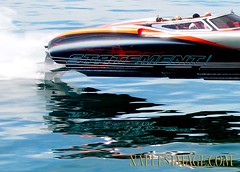 *** Time and again, the Buddha actually mentions the jhanas as a way to avoid the five sensual pleasures by means of stepping away from them, “transcending” them, literally 🙂 This is also the suggestion in the Commentaries to this sutta where a twofold “avoidance” is being discussed – the plain worldly renunciation or a more refined spiritual method by diving into the jhanas (cp. Kamasuttaniddesa) – to stick to our simile, entering and abiding in the jhanas would be similar to cranking up your engine and driving your boat so fast, that it is literally lifted out of the water, barely touching it (mainly mind objects only) Here is where vipassana comes into play, because even at such high speeds, if you drive in a circle and are not heading in the direction of the other shore, all is in vain. Besides these temporary measures, of course, once the boat is on the other shore (i.e having accomplished Vipassana) the boat is on dry land and saved from sinking 🙂