…i would encourage you to read this post first. Otherwise you will have a hard time understanding what is said next: 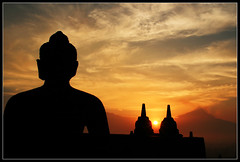 Now, interpreting “iti pajanati” directly as a way to meditate, even Buddha’s 4 noble truth become themself a theme of meditation a meditation instruction. You may have wondered how the first sermon was enough for Kondanya to become a stream enterer…well, maybe he did not have a metaphysical realization on hearing the 4 noble truths, but simply “exercised” them, as the Buddha suggested:

This passage is from the Petakopadesa, but that’s where it simply occured to me while reading the prominent pali passage found elsewhere in the canon. Look at this:

“idaṃ dukkhaṃ’nti nappajānanti” – they do not see it as: “this is suffering”.

Well, they who did not see it in the manner described they

create various (mental) creations…thoughts, intentions and finally deeds – leading to kamma and thus new fuel for additional lives consisting of myriads of life-moments. That makes sense. The method of noting arising and falling sense impressions and in its wake form (sense impression), feeling, perception, thoughts and ultimately consciousness will lead to a cessation in additional sankharas being generated by grasping those 5 phenomena.

Then, even more fascinating, now you can see stages of vipassana in the 4 noble truths, like this:

1. noble truth: See the suffering as “this is suffering” noting/seeing/knowing each of the 5 groups of grasping

2. noble truth: You go through the insight knowledges and realize that tanha or thirst is the root of suffering. You realize this because of the first noble truth or the method of your meditation.

4. noble truth: paccavekkhana-ñāna – or the insight knowledge of reviewing takes place. Now the meditator even gets a clear picture of the path he had to take in order to arrive at this experience and insight.

So, do the four noble truths not just list the disease and propose a cure but might they already be the medicine and instruction leaflet? This would make perfect sense in the light of Buddhas own characterization of his teaching as ehipassiko, or “come and see” and not a “come and a series of secret initiations later you will be able to see”