Or: How can i desire Nibbana if it is supposed to be the end of desires? 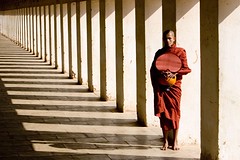 Part of mainstream Buddhism and supported by a notion from late Mahayana school of thought is the proposition that you cannot achieve Nibbana if you still long for it. This not only sounds good but also seems very logical if you look at it. This understanding is so mainstream nowadays that from Tibetan to Zen and even in Theravada circles the notion of “desire to attain Nibbana” seems contradictory to Buddha’s own teaching.

“How do you extinguish the desire for Nirvana? Simple. Abandon the distinction between Nirvana and Samsara, accept that we all have the Buddha nature (are already Buddha) and return to living everyday life!” {here}

This is not in accordance with the original teachings of the Buddha – it is quite the opposite. Instead of using a make shift raft (the Dhamma) to carry one from the shore of birth, death and suffering to the other side which is the end of desire and suffering one suddenly stops thinking: “What the heck! both sides of the river are just river shores”. So one stops to paddle and the raft drifts aimlessly midstream until the next existence finds us maybe in less fortunate surroundings and the practice of meditation and development of insight seems even further away. (Cmp. Dhp. 182)

So, what do the most ancient scriptures say about this seemingly contradictory statement, that a person could have desire for nibbana and still realize the desirelessness?

And here the second one:

The idea that one had to give up even striving for Nibbana was caused probably by a misunderstanding and trying to leap ahead: what is definitely the case for someone very well advanced might make progress unthinkable for someone who has not even started walking the path. Sometimes people are more inclined to think and conceptualize Buddhist philosophy (painting the raft) than to use and apply the Dhamma – thus seeing no results and wishing for the wishless they aim in theory.

It is one thing to practice Vipassana and not to cling to any sense impression including thoughts and concepts and it is another to built philosophical mountains with concepts taken from the concept of how to get to the end of all concepts. You might say: It is the difference between a 10 day Vipassana retreat and a 10 day Buddhology seminar 🙂

Stronger prior to breaking

Even the 4 noble truths