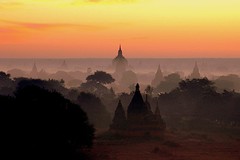 Ñāṇananda’s texts. This venerable monk, currently residing in Sri Lanka, combines a deep understanding of the pali canon – not just in theory (he was a pali lecturer at Peradeniya in his younger days) but also in practice (he studied under Sri Lanka’s most accomplished meditation master of the last century, the Ven. Sri Matara Ñāṇārāma).

Besides his famous “Nibbana sermon” 30 part series, a pali canon tour-de-force with Nibbana as the only topic, clearifying the paramount Buddhist goal, he recently published “From Topsy-turvydom to wisdom” – an enlightening series of smaller texts focusing mainly on meditation.

In this post i selected passages from three of those texts which are especially “enlightening” IMHO:

Some seers of ancient India held that it is impossible to understand consciousness itself, because it is with consciousness that we get to know everything else. They thought that it is like trying to touch one’s finger-tip with the same finger-tip.

But we have to get more acquainted with the five representatives of Name. Let us have them at our fingertips. In fact one can even count them on ones fingers. Feeling (Vedanā) is the little finger small but mischievous. Perception(saññā) is the ring-finger both popular and notorious. Intention(cetanā) is the middle finger prominent and intrusive. Contact(phasso) is the fore-finger fussy and busy all the time. Attention(manasikāro) is the thumb standing apart but approachable to the rest.

Now out of the whole lot who is going to be our witness of the back-stage workings of the magic show of consciousness. Attention of course. He is the most competent when there are no witnesses to prove a case of murder or theft. Sometimes Judges give free pardon to one of the alleged culprits under the oath “you have to tell the truth, the whole truth, nothing but the truth.”

So it is in this case of the tragic drama of consciousness, though himself culpable, Attention is dependable as a witness provided he does his duty as Right Attention (yoniso manasikāro).

Now attention will gradually disclose what feeling felt, what perception perceived, what intention intended, what contact contacted and last but not least what attention attended to.

This is why all insight meditators single out attention for preferential treatment when they want to get the full inside story of the tragic drama of consciousness.

In his book “Magic of the mind” venerable Nyanananda introduced a simile of the magic show (taken from the Buddha’s comparison of the consciousness to be like a magician in SN ?) and explained in detail how an insight meditator is moving away from the position of the simple spectator “living in” and being “overwhelmed by” the tricks of the magician towards a position of someone who is starting to see the backstages and behind the screens action which results in a dispassion and disenchantment.

Here, he reconnects that simile with the definition of name-and-form (namarupa) and how a meditator is going to use in practice one of his mental faculties to peek behind the workings between consciousness and name-and-form.

Where nowadays the term sati (“remembering”) from the verb sarati (“to remember”) has taken on a life of its own and is very often used in a sense “to be mindful” in place where the pali canon would use instead “yoniso manasikaro” (close/thorough/in-depth attention) venerable Nyanananda’s explanation gives us an idea for the paradoxical moment which the moment of enlightenment must be – it is when attention discloses what attention attended to and the duality between consciousness and nama-rupa vanishes in a moment of bhavanirodho – or extinguishing of being.

In this way one could say that if you use samma-sati (or right remembering) you are in fact practicing a form of yoniso manasikaro (or close attention) as you keep your attention watching/remembering/re-attending “what is” either in terms of the classic for sets of labels (the Maha-Satipatthana) gradually refining the process of attention to subtler and subtler objects, working your way from “an experience of the world” down to “how the world” is generated until you arrive at this samsaric cortex, the interplay between consciousness-name/form which is basically the barrage of six sense impressions, contact, feeling which arrive and are reflected in consciousness and which create your here-there duality and the echo of an I immediately followed by thoughts of grasping and clinging in this chaos of fleeting bubbles.

Lets go to another text, which will now sound like a summary of the aforesaid:

Throughout our lives, we are walking through an art gallery. On the vast canvas of the world around us, there are the objects and beings so realistic and life-like that we live fully immersed and involved in them. The mysterious four elements – earth, water, fire, air – with colour and form to deceive us, keep the panorama on the move, so we are spell-bound.

Insight into Name and Form helps us to throw off the spell produced by sight. Contemplation of the four elements within and without us forming the warp and woof of the world-canvas, gives flashes of insight into the unreality of the 3-dimensional world we live in. This is the ’form’ aspect of the picture – feeling, perception, intention, contact and attention with which we are enthralled by the panorama, constitute the “name” aspect of the picture. Practising full awareness with regard to them we become detached observers of our framed-up world.

Being aware of this framework of name-and-form, we can watch the scenes on the eye-screen as they come, stay, and go away as if we are watching a movie unmoved.

Another way of describing the moment to moment set-up and experience of the mind is Buddha’s famous declaration of the “five groups of grasping” or panca upadanakkhanda. They are form, feeling, perception, mental formations, consciousness. So they basically are the same like consciousness-nama/rupa but putting them all together in one list – not classifying the dichotomy between consciousness and name-and-form but listing them as the aggregates of our clinging. With a simple comparison you will see that from the group of mental formations the Buddha especially highlights contact, volition and attention in his definition of name and form. Of all the “sankharas” or mental formations we cling to, the interplay between attention based on certain volitions and faced with contact is the work place of the meditator. Sankharas are not just the lubrication which keeps the samsaric gear continue its operation and proliferates our word experience from moment to moment with a whole mountain of concepts, it might also develop the grain of wisdom which “contaminates” this gearbox and brings it to the brink of a stall (bhavanirodho).

But don’t fear, usually our mental activities produces enough “lubrication” in terms of concepts and worldy proliferation that there is hardly any chance for this “gearbox” of consciousness vs name and form to halt any time soon…

The tragedy however, is that everyone of these 5 groups is disintegrating. There is nothing permanent or substantial in them, to be prided on as self. They betray the trust one puts on them as ’I and Mine’. In the face of change and disintegration the very existence of the self is threatened. This is the dreadful predicament of the self-oriented being.

The Buddha’s solution to this chronic feeling of insecurity, is the development of the perception of impermanence. Taking a more realistic view of the five groups as impermanent, made-up, dependently arisen, and of a nature to waste away, pass away, fade away, and cease, one has to go on attending to their rise-and-fall with mindfulness and full-awareness. The perception of the compact will gradually give way to the perception of the heap. In one’s contemplation of the rise and fall, one will discern not only the breakers of the ocean of impermanence but also the waves, the ripples and the vibrations. This leads to disenchantment. One turns away from one’s deeply ingrained samsaric habit of grasping, holding and clinging on to the five fleeting groups which promise no security. Giving-up the attachment to the five groups one sees as the only security, the clinging free deliverance of the mind – the sublime peace of Nibbana.

So close you cannot see it