Or: What does sankhara mean?

some of the translations run as follows

However, a translation for sankhara is quite easy 🙂 Have a look at the follwoing simile given by the venerable Nagasena in the “Questions of King Menandros”:

“Also just as, your majesty, some man or other might prepare ghee, fresh butter, oil, honey and sugar into one (drink) and drink it himself, and make others drink it, then he and the others would be happy. {Milindapanha, II. 3. 11}

From this simile it is clear that sankharas could very well be translated as ‘preparations’. But, i hear you ask: “What the heck, are ‘mental preparations’. And how do ‘preparations’ relate to Buddha’s teaching”?.

Well, in our modern day and age we would use the following terms instead: (mental) “planning / opinionating / decision making / speculating /preparing to do something” – it is our thought machine going on in our minds moment after moment after moment… creating a force which results in actions and in results of those actions.

An example: We take in a sound of a bird and immediately have preparing thoughts like “I love the song of this bird”. “I like to see it”. “Where is this sound coming from?” etc etc. These preparations, eventually, will lead to new moments of existence … this is how preparations prepare us to experience even more new sense impressions once we started moving our head to see the bird a whole new series of sense impressions and resulting sankharas will arise and move us forward. This, in effect, is watching kamma and vipaka in action 😉

If you look at the 5 upadanakhandha which, according to Buddha, completely summarize our “world” experience you find the term sankhara in the correct spot, if you keep our simile of listening to the bird in mind:

Eventually this moment of experience will lead to new moments of sight-, sound- etc. thought-objects, feelings, perceptions and consciousness. So the sankharas are the preparation part, the part, where the foundation for the “next moment(s)” is laid.

In the case of the meditator the mental preparations are slowly but surely subdued to a mere tagging, labeling. Noting “impermanence” is a preparation as well (even a meditator keen on insight, has to work with what is there already), but its direction is not towards proliferation of our experience but towards a minimizing of preparations/mental commentating/planning through the use of a simple “label”. Giving up (pajahati) whatever arises.

The tool used to achieve this is attention (manasikaro).

Usually attention is working to enlarge the chatting and opinionizing and preparing of the mind, insomuch as our moment to moment attention is drawn towards the content of the scenes of our experience: Not noting how the world appears but rather enjoying, ‘being”, the movie. This is what the Buddha calls an “ayoniso manasikaro” or an attention which does not look at the roots (its own roots).

Now, the meditator trains his mind using yoniso manasikaro, or an attention which goes back at the root (yoniso…lit. “wombly” meaning thoroughly, completely, going to the source). So instead of watching the movie which our senses present it means applying attention to the inner works of the mind, attending to the rise of fall in seeing, hearing, smelling, tasting, feeling, thinking.

This gradual step-back towards the source is made possible by sankharas in a novel, very subdued and tag like way, which allows attention to use the power of names (the power of nama-rupa) to get away from lengthy stretches of rolling identified (tam-mayata) in thoughts, sights, sounds etc. It replaces the in the movie “What a beautiful sunset” -like sense movie with a simple tagging of the individual frames “Seeing, seeing” or “impermanent, impermanent” etc…

Now, this is going to be so boring for the mind 🙂 not right away, there are all kinds of stages we go through, say the elders, but eventually dispassion sets in, disenchantment.

Seeing that the movie is in reality a framed show, the “fun appeal” (nandiraga) towards those sense impressions will subside, thirst will at one moment stop, the mind will stop taking a stand on some other object, and as the mind does not take a stand, does not take up (upadana) there will be no connection between the moments of being (bhava) and existence with its smaller and larger sequence of birth and death, sorrow and suffering will cease. And they call this: “bhavanirodho nibbanam”.

While doing so, thorough attention (yoniso manasikaro) brings knowledge to a place which was formerly wrapped in ignorance. 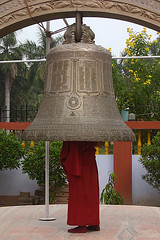 What does the Buddha mean with avijja – ignorance or vijja – knowledge? It is this un-covering of how the mind operates through the eye-witness of deep attention. We develop knowledge of how the movie itself is generated. By this we slowly but surely gain understanding of something which was so close to us, but which we never were able to see.

Can consciousness see itself?