In the context of liberating wisdom the Buddha frequently employs a term called “yathabhuta” when
describing the practice of insight meditation.

Usually this term is translated as “as it really is”. So, a passage like this:

…is usually translated as: 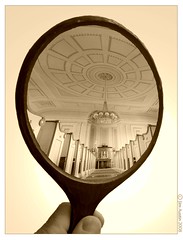 the monks: Monks, matter [sic] lacks self, that which lacks self is not mine it is not I or my self. This should be seen as it really is, with right wisdom. – Feelings – perceptions – Intentions – Consciousness is not self. – Monks, the noble disciple seeing it thus turns from matter, turns from feelings, turns from perceptions, turns from intentions, and turns from consciousness. Turning, [he] is calmed and released. Knowledge arises: I am released; birth is destroyed, the holy life is lived to the end, and I know there is nothing more to wish.’ SN 21. 1. 2. 6.

The above paragraph, of which the Khandha and Salayatana chapter of the SN are filled with (in various variations, interspersed by similes and explanations) are vipassana meditation instructions. But, do we realize that when reading English (or other translations) of those passages? Can you discover a clear meditation instruction in the English paragraph above?

The paragraph starts out with an instruction (see the sentence in italics above) and continues to apply the same kind of instruction to either of the 5 groups of grasping or, in case of the Salayatana chapter of the Samyutta Nikaya, to the six sense impressions. In both instances the description makes it clear that whatever experience arises to the meditator it has to be dealt with in the way the instruction outlines.

Finally in the last part of the above paragraph, the result is mentioned. It is a short form of the elaborate 16 stages of insight knowledge culminating in the realization of nibbana.

Let us have a closer look at this instruction part and -at the same time- give an alternative (more literal) translation:

Whatever is void of self of that (think): “This is not mine. This am i not. This is not my self.” So is this as soon as it/as far as it has become (come into existance) (yathābhūtaṃ) to be seen (daṭṭhabbaṃ ) with right/correct wisdom.

A couple of observations. daṭṭhabbaṃ or ‘to be seen’ does literally mean what it says: looking. There is only one way to see these things, and that is in a meditative session/environment. The verb does not say “think” or “conceptualize” or “reflect” or “analyse” and you will attain to Nibbana. No, it clearly says that you have to see these phenomena in a certain fashion, with right wisdom.

Now, even “right wisdom” would be an empty phrase if we do not know how we should see them in our meditation. Well, we don’t have to look far, everything is right in front of us, explained in this little paragraph. However, and that is the special point of this posting, the simple non-literal translation of “yathabhuta” with “as it really is” does not help in the context of meditation. It is not completely wrong either, but if we go word for word and consider some other facts, the meaning behind yathabhuta is even more powerful. The problem here is, that the listener at Buddha’s time was very well aware of the literal meaning of those terms. He was able to grasp from this and the context the “instruction” part. He may have even applied the instruction at the same time of hearing the discourse spoken. No wonder then, that many suttas tell us about attainments of Nibbana while listening to such words. But, back to our text:

More important though, take a look at other examples where the word is used:

Bhūtaṃ is simply the past perfect of being, meaning “become”. Have a look at the PED’s definition:

So, what does this term stand for? “as born“, “as far as become“?! He should see things as far as they were born? “What the heck does that mean?” – We can almost hear that question raised by the translators of pali texts…How can you see something as born?

Well, it took quite some time and effort to dig out the ancient meditation techniques of Theravada, and it just happened recently, some 50 years ago and it is mainly the Burmese Sangha who deserves our compliments for this re-establishment of vipassana practice in Theravada.

Of course, in the course of vipassana, to see phenomena like feeling, form, perception, mental preparations and consciousness as “This is not mine” [tag it!] AS (SOON/FAR) as they arise or as soon as they are born makes complete and utter sense. We are reminded of the Bahiya sutta, where the Buddha says, “by the seen, just the seen”, or this (and many other similar) beautiful verses:

But such an observation and thus translation and choice of words is hard for someone who was never experienced a vipassana meditation or similar instruction. So now, we live with Western translations and go for vipassana retreats and some ask: “Why did not the Buddha give this kind of instruction in the Suttas?”

The right answer is: Well, he did! In fact, overwhelmingly many texts talk in this direct way, but it might need another generation of pali translators to uncover them. We find many instances with variations of this basic technique of using labels to stop short the mind at bare awareness and thus by slowing the movie allowing a very deep look into the mind.

In fact, we might even learn more and derive more details for current vipassana meditation instructions if we take a look at the Pali texts from this very literal and meditation-related point of view.