Have you ever wondered, where the Buddha’s “meditation instructions” are? Why doesn’t he talk about them in the Pali Canon? Or does he? Well, he does… In fact, he cannot get any clearer explaining how exactly your practice of Buddhist meditation would look like. Lets take this passage, for example:

Now, if you read most translations you will probably never come across a translation like this:

But instead most translators will find this translation too clumsy or too literal. They will translate it for you this way (missing the juicy stuff):

Buddha literally asks the monks to “note”, or “label” any form (saying but more likely thinking) “impermanent”. He even starts the second sentence saying “so seeing”. The second translation makes you immediately wonder: “how do i see it as impermanent”. Whereas, in the first translation, it tells you exactly what to do.

Of course, you need to know how the word “iti” is used in Pali. Whenever in pali someone would talk, say or think 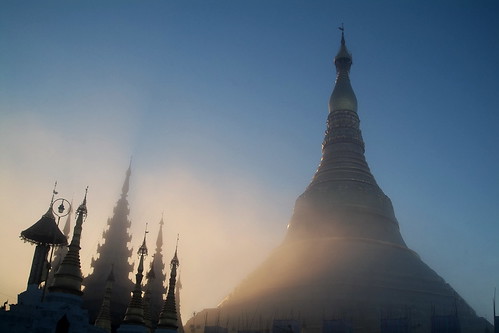 something, the word “iti” or shortened “ti” is used to mark the end of the expression. It works like our modern day ” ” and implies something said or thought. Normally translations would translate this with either direct or indirect speech marking the sentence with an apostrophe. If you happen to have this background knowledge even a still closer literal translation would make sense to you:

However, in cases where the Buddha is talking about a meditation topic, as far as i know, nobody came of the idea to follow through and translate such a passage in the same way! Probably because of limited exposure to Buddhist meditation and practice methods.

(Remember: Vipassana practice with the usage of “labels” was reintroduced into Theravadan practice just recently in the 50s from Burma. Even for samatha practice the only place translations get this right is in Visuddhimagga’s description of the kasinas where even a modern day translator would know to translate “pathavi, pathavi”, i.e. literally. Besides, monks/scholars who translated the majority of Pali texts usually tended to have a more academic interest in Buddhism).

So most translations from the Pali canon where made before this not unimportant detail of Buddhist practice become known.

Another supporting argument for this “unusual” but more literal translation and similar passages is the fact that in the above cited quotation, if the Buddha would really had meant “knows/regards as form” in Pali he would have said it this way:

…which would this time literally translate as “perceives/regards/knows form as impermanent” … but, as we saw, this is not what the Buddha said here.

Now, very often, after the Buddha or another monk gives such a direct instruction they would point out to trees, huts and meditation places. “Go, sit down, and practice!”. It really could not get more practical then that!!!

But we, reading those passages, because of this tiny change in our translation (or omission) are looking for the instruction and did not find one, asking ourselves, so “i am supposed to see form, etc. as impermanent, but practically, how do i do it. What do i need to do in terms of taking an action?” – that is really tragic, because the Pali text DID give the practical instruction:

just, when you perceive it, label it, noting: “impermanent”.

Here is a list of other instructions, randomly taken from the texts…they abound with direct instructions to “note”, “label” or acknowledge knowingly:

The suttas are full with this kind of meditation instruction. If you like to look this up for yourself just search for “*ti jānāti” (or similar) with a program like the CST4 in the pali canon. It will return hundreds of results with instructions for samatha as well as vipassana type meditations.

Finally the Buddha often would end his sermon saying:

Whatever a teacher should do — seeking the welfare of his disciples, out of sympathy for them — that have I done for you. Over there are the roots of trees; over there, empty dwellings. Practice jhana, Ananda. Don’t be heedless. Don’t later fall into regret. This is our message to you all.” {MN 106}

Did we really expect him to “hide” his instructions? Not emphasize them clearly and make them obvious to anyone willing to hear? It seems then, that the “ordinary” listener at Buddhas time could indeed – while listening or after hearing a sermon – apply the teachings and put them into practice right away, without the need to seek guidance from a series of seminars which would iniate him. For, at the time of the Buddha, the meaning of “iti” was clear.

We, on the other hand, had to wait for a Ledi or Mahasi Sayadaw to make use of the commentarial “sallekkhati”-verb (to mark, lable) or alāpeti (to ‘count’)   to explain something hidden in plain sight.

Thanks to the input of Dmytro and others one crucial thing to understand here is that even though “iti” may imply a form of noting it does NOT imply thinking (in that case we would find a word like ‘cinteti’ or ‘vitakketi’ etc.) If you ever participated in a Mahasi/Goenka/Nyanarama style vipassana retreat you would know what is meant by that. “Thinking” would imply random, discursive elaboration…it would imply a continuous identification with “Dhamma thoughts”… no, this is definitely not meant here (and hopefully not misunderstood).

The correct way of using a label/noting would rather resemble a quick, swift and decisive “tagging” of the object which drew our attention in and starts to unfold into a proliferating world. The usage of such a short label like “this is impermanent” or simply “impermanent” is only a means in facilitating our vision. If not stopped by this label (especially on weak concentration grounds) the mind will simply continue to pull you in. So with the help of such a label the mind is stopped in its tracks, can quickly return to its anchor point (like breath) and within this “differential” is able to see what just happens/ed.

An article by the most Venerable Katukurunde Nyanananda goes into detail and explains how the labeling could be refined to support the progressing concentration and awareness of the insight meditator:

This goes to show that the proposed literal usage of “iti” in the context of a meditation instruction is not that far fetched. In fact, it seems as literal as it can get. Granted, it makes more sense if you try it in your meditation. And though in theory it looks strange because of all the books on Buddhism which taught us that the canon has to be “interpreted” before we can use it for meditation – from a pragmatic standpoint it immediately would justify most modern vipassana techniques. In fact they now would look like heirs to the original pali texts…even though these techniques were probably “re-invented” in Burma through following the commentarial overlay…

For other posts on this blog on this topic:

The king and the holy one

Hearing background noise in the jhanas?