…was Ayya Khema‘s noble intention. Let us all walk in her footsteps.

From an email thread: 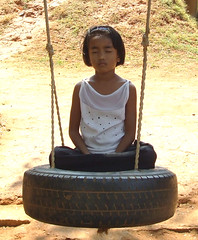 better i respond now, before letting this lie around too long…so short answers. if not clear enough, give me a call 🙂

I’m glad we talked about the Buddhanussati meditation, i tried it last night… it seems to be helpful…  It is hard to find on the internet exactly how to do it, so i was using the instructions that you gave long time ago for the kammatthana, using ‘sattha’ or ‘sattha devamanussanam’.   Is is the best way, or should i think about all the virtues…?

Did you ever read the life of the Buddha, like “Old path, white clouds” or such similar books? Knowing the life of the Buddha makes him “knowable”. In Buddhanussati you try to rest your mind on ONE quality of the Buddha. Of course, one could also do a contemplation on the Buddha, and most people do, but if you want to develop jhana, you are right, you would have to get away from “many thoughts about and/or why the Buddha is the teacher of gods and men” … and start hooking your mind on a “feeling” or “mental perception” of this. It sounds more difficult than it is. REPEAT the ONE THOUGHT again and again “teacher of gods and men” (or whatever of the 9 attributes of the Buddha is your favorite one, like “Buddho” etc.) and after a while you will get a resonance in your mind… even without “discoursive thinking on this topic” your mind will fall into a wordless “notion” of what “teacher of gods and men” stands for… if you start gliding on this “notion” piti will appear… and YES you THEN “shift” your attention towards piti. BUT that is something which normally happens by itself so you do not have to worry about “making it”. If you notice piti rising, you sure can mentally, thoughtless, let it come in and ride on it… after all, that is what the eagle does. piti is the warm uplifting stream of air.

– should i recollect a virtue, then try to generate a feeling, or just contemplate the virtue only?  I mean, should the goal be to have a ‘feeling’, like with metta meditation?

– if it is a feeling, should it be a feeling directed toward the buddha?  I know you aren’t supposed to do metta for a dead person, so since it seems like if i was to generate a feeling towards the buddha (based on a virtue) in this case, it would be similar to metta, probably that’s not what i’m supposed to do… ?

yes… but you start with the concept, “teacher of gods and men” again and again… until it becomes a thoughtless experience…a “mental feeling” if you will 😉 thus drawing you away from the 5 senses and pacifying your mind…subduing the 5 hindrances. Contemplation is not Concentration.

– i was reading that Buddhanussati can only be used to get to ‘access concentration’, not to jhana, but still i’m thinking that this further indicates that it should be done as more of a contemplation rather than a generation of a feeling.  Then that would explain why they say it would not lead to jhana due to its ‘complexity’.

exactly…ANY contemplation will not lead to the Jhanas …  See, the point is that even metta will not lead to the jhanas as long as you go on doing a contemplation with it. Entertaining a train of thoughts will not lead to a one pointedness by definition.
But because people start moving towards the “nice feeling” when doing the modern mainstream metta meditation, it is easier for them to be taken over by piti (once in a while) and thus it helps many to find (stumble over) the jhanas from time to time. Once you know that you make it even more difficult with many thoughts to reach a concentrated state of mind getting into the Jhanas becomes an easy exercise.Buddhanussati could do the same for you, if you know what is important to get to the jhanas…. If you just abstractly think about the attributes of the Buddha, of course, it is “too complex” but if you FALL into one attribute and make your mind rest on it, you will draw your attention away from the outside and will see how the jhana factors align, the 5 hindrances vanish, piti will arise and your jhana journey begin. In fact, there are many instances reported in the commentaries where people felt piti after doing buddhanussati…

hope this brings some light into the matter.

Question:  When doing Samatha, if I get to the point of sustained attention using metta, should i shift my attention somewhere else at this point?
check this:   http://www.leighb.com/jhana3.htm

this would be vicara.

Anyway, I was wondering what your opinion is on shifting attention … here he is talking about breath, but later he is saying to shift the attention like this for any object you are using…  he means to shift it to any pleasant sensation in the body that you notice:

see… i would express it a bit differently. This is usually happening by itself. Because, if the foundation is laid, this “pleasant sensation” (piti) will get noticed by you in any case and as soon as you note it your attention will shift to it and you will start “riding the wave” and booom you suddenly find yourself in “a state” and just enjoy it… there you go. Jhana no. 1.
So, i think he is right, but if people start SEARCHING for this feeling BEFORE they got a good foundation they will break down their foundation by additional mental activity…the “looking for the sensation” then becomes a disturbance. If you can make sure that your shift is sooooo subtle and happens when it should happen, it is okay. Tell that to someone with limited experience in this arena and you might confuse them. Hope you are not.

You will need a good bit of concentration to watch a pleasant physical sensation, because a mildly pleasant feeling somewhere in your body is not nearly as exciting as the breath coming in and the breath going out. You’ve got this mildly pleasant sensation that’s just sitting there; you need to be well-concentrated to stay with it.

One reason i’m asking is because let’s say i’m using metta: i have the metta feeling, AND i have sustained attention on metta, but then what? i remember i already asked you before how to tell the difference between metta feeling (meditation object) and piti/sukha… and you said that the piti/sukha would be sustained without effort…. but it is still not clear, since it seems like the metta feeling is also sustained without effort.. at least to some extent, before piti arises, isn’t it?  Then when i was reading Leigh’s instructions, i was wondering if i need to somehow shift the attention…???

Shift the attention to where? see, this piti will come like a beautiful  invisible wave from the “background” of your mind… that sounds very flowery, but it is very very similar to metta feeling,,, still whereas you have to hold the metta, the piti will start holding you.… when you feel that is coming, sure, you need to watch it….but if that happens you will want to watch it anyway….hope this makes it a bit clearer…it is really not that complicated once you got it… keep going, once you go there one or two times, you will know what i mean. it will sure come, especially, if you can already hold your attention at the metta feeling for some periods of time.

Also, one more question, this is from Bhante G’s book, he is saying this should be done after reaching first jhana, but before going on to the second jhana:
Perfecting the first jhana:
The meditator should try to acquire five kinds of mastery over the jhana: mastery in adverting, in attaining, in resolving, in emerging and in reviewing.
– Mastery in adverting is the ability to advert to the jhana factors one by one after emerging from the jhana, wherever he wants, whenever he wants, and for as long  as he wants.
– Mastery in attaining is the ability to enter upon jhana quickly
– mastery in resolving the ability to remain in the jhana for exactly the pre-determined length of time,
– mastery in emerging the ability to emerge from jhana quickly without difficulty,
– mastery in reviewing the ability to review the jhana and its factors with retrospective knowledge immediately after adverting to them.
Question:  I think ‘advert’ means ‘directing attention to’, but not clear, what do you think he means in the part i highlighted above? What do you think about this, is it necessary?

That is a rather fancy translation of the pali for “paccavekkhana”.

Here is an entire posting on this topic:
http://theravadin.wordpress.com/2008/04/16/reflecting-on-the-jhana-factors/

Jhanas are a better foundation of any Vipassana practice and they are less difficult than many people think. The more people know and practice right concentration the bigger the benefit for the Dhamma overall. Being less mysterious than most people imagine they are not less enjoyable and beneficial once you are able to attain them repetitively. One way of better understanding them is to imagine concentration as a process. Your mind will quite naturally pass through the four jhanas when you succeed in moving your attention inward holding and focusing it on a mental object. The rest will happen by itself. Have a look at the jhana factors to understand your progress and know the 5 hindrances to identify your weak spots. Good luck!

Where is the Buddhist Bible?