This is the disciple of the Buddha, living in the house. He has confidence in the Buddha’s awakening. He trains himself to purify his actions and his speech. He cultivates generosity, learns to sacrifice and let go. And this is his practice: he embraces opportunities to listen to the Dhamma – the word of the Buddha, of awakened monks & nuns. But that’s not all. He makes it a point to remember the Dhamma he heard. He tries to memorize it, keep it in his mind. Because he knows that thus he will think about it, look at it, investigate it, deeply understand it. Then, by such practice, he knows this to be a natural law, his life will follow suit, inevitably.

Slowly but surely his whole life gets touched and transformed by the magic that is the miracle of the Dhamma: In his work he is industrious, hard-working and diligent. In his financial manners, he is generous, avoiding debt, knowing the benefits of saving and he never forgets to uplift the mind of his family and friends. He takes good care of his parents who he owes his training and guidance in life and instructs & supports his children and companions always on the lookout to associate with good and noble people. Thus his worldly live is in balance allowing him to devote more time and clarity to his spiritual life.

At least once a week, clad in white which symbolizes purity, he enjoys a day of silence and contemplation. He makes up his mind to invest into this noble training of body, speech and mind. He knows, such a day spent following in the footsteps of the Arahants will be, at the end of his earthly days, worth more than any fortune in his bank account. That day, he reminds himself of the Dhamma he learned, he might fast that day too, keeping it light and simple, reflecting over the words of the Buddha. He might recollect the Buddha’s qualities, what makes an Awakened One such, he might recollect the Dhamma and Sangha. He might recollect the qualities of the Devas knowing that his life if purified in this way will lead to such a state of mind and no other destination.

Every day, he starts his morning with the 5 wholesome reflections. Every morning he might re-affirm his confidence in the master, recluse Gotama and his explanation of the Dhamma and the group of disciples who follow this path earnestly. Every morning he might reflect on the virtues he is determined to bring into his life and he might think how he can practice generosity that day. Every day, he might make it a point, to increase his memory of the Buddha’s teachings, reciting the words of the Awakened from memory. Every day you can find him calmly reflecting over the meaning of the Dhamma he learned. Others call it meditation, he calls it sammā samādhi and bhāvanā, or development, for he knows it is like a plant, it needs continued attention and careful handling to let it grow strong to bear fruit.

He knows, that from confidence comes serenity and from serenity joy. That inner joy will lead him more than often into the calm abiding of the four jhānas. He knows how to utilize the perfect calmness and equanimity of the fourth jhana to recollect his past lifes, yes, he might master such similar skills, but over all, he knows no higher joy than to reflect over the impermanence of the six senses, watching their bubbling arising and passing away as his wisdom grows, knows no higher joy than to observe the five aggregates arising and dissolving, contemplating the dependent origination leading to deep insight and purifying wisdom. 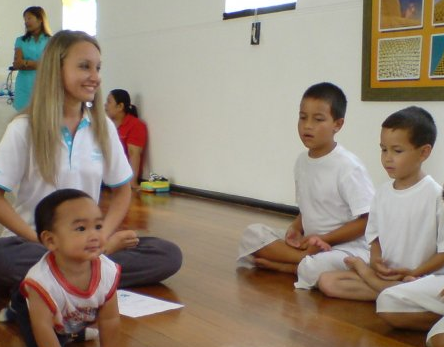 As his weekly meditation days (Uposatha) grow in depth, guided and aligned by the words of the Buddha which he cherishes like an ancient treasure, his skill in deepening his awakening through the application of the meditations as described by the Buddha becomes formidable. He, still wearing a white garment, living among wife and children, keeps his mind firmly engaged in the mindfulness on the body, or the four satipatthanas, or the meditation on breathing, leading to deep insight & wisdom & the fruits of stream entry, once return and non-return. This he knows as the path to Nibbana as pointed out by the Awakened One.

Based on the following suttas:

How to really cleanse your mind