Or: The meaning of samyojana 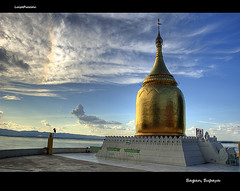 The Buddha defined four stages during the emancipation from Samsara:

All of those four are able to enter phala-samapatti, or the attainment of the fruit – a special meditative absorption which only they are able to enjoy for their minds found a way out of the thirst for each moment, the grasping and holding of fleeting phenomena.

Besides characterizing them in accordance with the amount of lives they will still stay in the cycle of birth and death, Buddha introduces a term to denote certain “fetters” which still bind them to existence. In each of the 4 phases of progress different fetters are cut.

Here is a description of the fetters:

There are 10 fetters tying beings to the wheel of existence, namely:

Why did the Buddha call these obstacles “fetters” or samyojana? What do they have in common with a chain or fetter to justify such a term? Did Buddha name them “fetters” in a

Reason number 3 is much more likely, don’t you think? We know how pragmatic Buddha’s approach to teaching was and in most cases enumerations and terms used reflect a direct comprehensible experience which the Buddha a) was looking to put into a simile and b) name with a very clear and precise term. (With precision not in a materialistic way, but psychological that a person practicing his teachings knowing his language would immediately understand what was meant, cmp. nama-rupa as in name-and-form). Let us try an explanation:

A person walking on the path of vipassana towards the moment of stream entry will overcome personality-believe, doubt and clinging to rituals.

Because of the nature of them being “chains” and “fetters” the meditator, while progressing towards stream entry will – the closer he comes to his goal – feel those 3 fetters becoming stronger and stronger. This is his personal experience which may remind him of a man,  who with one foot chained to a pole, only realizes his yoke once he tries to run away from the pole.

The ego of the puthujjana doing vipassana moving through the insight knowledges gets stronger, bolder, ferocious. Letting go of the “i” gets trickier and trickier. Doubt and scepticism towards, teacher, place, teaching, food, climate, fellow meditators increases. He may be seen developing neurotic behaviors sticking to rituals and outward regiments, missing the one all-important point: Noting/seeing this fetter as well (or, more precisely, that which makes this fetter originate, which will be some kind of sense impression or a series of sense impressions, acting like a trigger to the fetter, blocking the neutral noting through an extra layer of delusion)!

If your foot is chained to a post you might not know it. You might very well believe that you are free. As soon as you try to run away from the pole (not around it – that’s what most people do, in wider and narrower circles) you will feel the tugging on your ankles, you might even feel a pull back towards the pole.

Once the chain/fetter breaks, however, you may even experience that the opposite is true. The sudden release of tension will push you even further from the pole, stumbling you might fall forward, getting back on your feet, maybe even a bit closer to the pole but now free, so that you can move ahead very easily.

Suddenly while moving away joyously from the first pole, experiencing the new found freedom from the first three chains, you sooner or later realize that your other foot is bound to a second pole. This fetter, however, is much longer, thus it was hidden and only now, that the stream enterer moves from his position of newly gained freedom towards the stage of once-return the next fetters will appear and become stronger: lust and hatred.

Eventually he will break them too and the once returner is said to have very much subdued moments of lust and hatred. As if the the second pole is tugged to your ankle with 4 ropes (2 for lust and 2 for hatred) and as a once returner you cut one of each.

Realizing the stage of a non-returner the other two chains of lust and hatred (very refined, thin and long) are broken as well and now, and moving even further away, freed from the first two poles the higher five fetters start to increase and become noticeable. The closer the Anagami comes to the stage of an Arahant, the stronger conceit, delusion, restlessness and craving for subtle forms will get (cmp. AN III, 131 – very nice how Sariputta points this out to the Ven. Anuruddha, then an anagami).

So, fetters are the name for those things especially hard to overcome at certain stages on the path / during practice of insight meditation. Overcome here means to “see” them, be able to “note” them and not to identify with them or to being carried away by them. They are, so to speak, Samsaras way to rear-up before letting you go.

Hearing background noise in the jhanas?