This posting, in a way, continues the discussion on whether there can be craving for Nibbana. 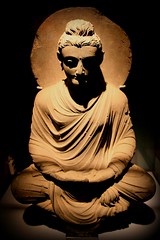 that there well can be such a desire which is more like a motivation for the goal and the craving for Nibbana would eventually subside on the path towards the goal (or more specific: when the raft is close to the other shore, the meditator has to leave even the boat.

In sankharupekkha (a stage in insight meditation), noting of phenomena is so refined, that even thoughts and shadows of “I”, “mine” as well as notions on the path and practice itself have to be given up. However, the boat has to get there somehow and a lot of paddling is necessary.)

Having said that, from a Mahayana perspective this seems wrong and we mentioned that modern day Buddhism’s answer to that question resembles more a Mahayana understanding of the path towards enlightenment (Tenor: Nibbana is so far away, lets stick with compassion – that is easier).

Taking up for discussion just one such source for this mainstream understanding let us try to “tackle” the great grand Lankavatara Sutra, the “foundation of Zen”. This will be hard for me to do, as you know from other posts, because of my “attachment” towards ZEN’s simplicity and no-nonsense focus on the practice of the path :-). But rest asured, this post will have a happy ending.

Now, lets have a look at this passage from the Lankavatara Sutra:

The Bhagava replied: The world where love grows, i. e., the desire for sexual embrace, showing itself in beating, slapping, suggesting, kissing, embracing, smelling, looking-sidewise, or gazing may give one momentary pleasures but is productive of future grief. [With the Stream-entered] there is no greed for such. Why? Because they are abiding in the bliss of the Samadhi which they have attained. Hence this casting aside, but not of the desire for Nirvana….

If you look up the stages a vipassana practicing person is going through you will find out that, at the very end, even duality between an I here and a world out there will vanish. Until up to that moment (see Bahiya’s Bodhi) lots of effort, determination and wisdom is necessary to get to such a subtle point. Here the Lankavatara wants to make the reader believe that a “Stream-enterer” abiding in his samadhi of realizing nibbana (“phala samapatti/attainment of the fruit” or “animitta cetovimutti/objectless freedom of mind”) still harbors a desire.

It is like two athletes. One runs and reaches the goal. The second one does not run. When he hears the first one saying he reached the goal the first one says: you are not there yet! Because if you can still talk about the goal you must be looking at it, ergo still be in front of it, ergo not behind the finish line. Now we all know, that one can cross the finish line and talk about it – maybe not at the same time 🙂

Mahamati, here in these paths and abodes of existence they give out varieties of teachings which are based on discrimination; [relating to Theravada] that is to say, as they are above such things as the attainment of the fruit, the Dhyanas, the Dhyana-practisers, or subjects for meditation, and as they know that this world is no more than what is seen of the Mind itself, they discourse on the fruit attained [for the sake of all beings]. Further, Mahamati, if the Stream-entered should think.”These are the fetters, but I am disengaged from them, ” they commit a double fault: they still hold to the vices of the ego, and they have not freed themselves from the fetters.

You may want to read the last paragraph again: It expresses a very modern notion in Buddhism, i.e. that you cannot talk about Nibbana in technical terms like “phala samapatti” (or attainment of the fruit) because then you use language, so you are discriminating, so you are bound by samsara, thus you cannot be enlightened. If you ever wondered why the ZEN masters prefer to clap on your back instead of talk about the details of the fourth jhana, now you know why.

But did not the Buddha himself come up with this unique “system” where a gradual development is possible up to the point where discrimination is done away with? Why not talk about the path up to that moment? Well, i guess this is a very fundamental difference between Mahayana/ZEN and Theravada. The latter, in the spirit of the Buddha, presents a scientific program for salvation, whereas, for the mystic, this sounds like a sacrilege.

A different “point of view” on the matter of fetters for the stream enter would probably look like this.

Further, Mahamati, in order to go beyond the Dhyanas, the immeasurables, and the formless world, the signs of this visible world which is Mind itself should be discarded. The Samapatti leading to the extinction of thought and sensation does not enable one to transcend the world of particulars, for there is nothing but Mind. So it is said:

176. The Dhyanas, the immeasurables, the formless, the Samadhis, and the complete extinction of thought (nirodha)–these do not exist where the Mind alone is.

178. The Dhyana-practiser, the Dhyana, the subject for it, the destruction, the seeing of the truth, –these are no more than discriminations; when this is recognised there is emancipation. [well, this is true. but then that is exactly what the terms “stream-enterer…arahant” stand for :-). seems like the pali canon or at least a deeper understanding of it had been lost when the lankavatara sutra was written]

The strange thing is, that the Lankavatara Sutra which brought about Bodhidharma and Zen does, in many instances, gets it right, down to the core:

But none of these views are logical, and none are acceptable to the wise

Maybe in those days many monks and lay people ran around claiming to be stream enterer whose explanations of their attainment where not really in accordance with what was perceived to be Nibbana in the early days as described in the suttas. Maybe the study of the early suttas had declined or they were only available in Sri Lanka at that time, the Sanskrit version of the pali canon always lack some comprehensiveness in comparison to the Theravada Tipitaka.

Another reason – much more in respect towards the effort undertaken by the Lankavatara may be the opposite: What if there was so much theoretical speculation and discussion that someone wanted to radically stress the point that ultimately you would have to let go even of these terms? Well, as in many other areas of expertise, some things you only understand when you are ready to understand.

But then again, if just one smart and devout person in that day and age would get back to practice and work on himself, he probably felt very disillusioned with contemporary Buddhism and, not being able to relate to the texts or text understanding of his time started writing something which he believed stressed the important -practical- points. The last point to overcome. Unfortunately those who came later started venerating this insight and showed disregard to the 90% of practice leading up to this sphere.

Now i personally think that it was not really a proper thing to put those words into the mouth of the Buddha who clearly did not speak the Lankavatara nor any other of the Mahayana Sutras, but at least we can appreciate the effort and the fact, that the Pali Canon finally survived and is more accessible than ever before. In fact, if you are looking for similar topics and texts taking you to the edge of language, thought and understanding, i recommend reading the Salayatana and Khandha Samyutta. And in real ZEN manner, they are – unlike the Lankavatara Sutra – refreshingly clear and to the point.

So, what do we learn from this? Maybe that the Mahayana foundation of ZEN re-invented Buddhism? As i said, this post has a happy ending:

“A tangle inside, a tangle outside,
This generation is entangled in a tangle.
I ask you this, O Gotama,
Who can disentangle this tangle?”

Buddha:
“A man established on virtue, wise,
Developing the mind and wisdom,
A bhikkhu ardent and discreet:
He can disentangle this tangle.

Those for whom lust and hatred
Along with ignorance have been expunged,
The arahants with taints destroyed:
For them the tangle is disentangled.

Where name-and-form ceases,
Stops without remainder,
And also impingement and perception of form:
It is here this tangle is cut.

Reflecting on the Jhana Factors

The hidden meaning of ‘yathabhuta’