The story of the elder Mahāmitta: 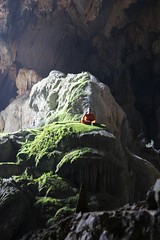 The elder Mahāmitta, as they say, dwelled in the “plougher cave”. Close to the cave was a little village where he went for alms. An old lady cared for him like her own son and was serving him food when he came begging for alms. One day she went into the forest with her daughter and told her:

“My dear, tomorrow i will prepare a special meal, made from rice, milk, molasse and palm sugar. Having prepared it i will offer it to our dear monk Mitta, and you shall have some too, i will just eat the left-over with sour gruel.” – “But dear mother, what will be left for you to eat during the day?” – “A leaf soup is all that will be necessary for me, my dear.”

Now it so happened that the elder had dressed in his robes taken his alms bowl and was on his way to the village when he on his way trough the forest walking towards the village overheard their conversation.

“This great Upasika (lay devotee) is content with a sour gruel while she reserves the fine rice for me. During the day she lives on a leaf soup! And she does not give because she longs for material gains like property, dresses, food or riches. No, she gives because she hopes to attain to the three attainments of Nibbana (stream entry, once return and no-return). Can you, Mitta, help her gain those attainments or do you not? You can definitely not help her gain those attainments if you receive her food with your own mind still bound by lust, hatred and delusion.”

With that thought he put back his alms bowl into its pouch, loosened the robe strap and went back to his cave. He stowed the bowl under his wooden bed frame, hung the upper robe over the robe bar and said: “I will not leave this place before i have not attained to Arahantship“. Thus he sat down declaring his determination.

The whole night he spent with intense alertness as a humble begger-monk (bhikkhu) developing his insight and attained to Arahantship in the early morning of the following day.

Like a slowly opening lotus leaf this great being now free from influxes released a slight smile on his face.

A tree goddess, living at the entrance of the cave and having witnessed what had happened, sung, on thi occasion, the following verses:

Who terminated influx free, is worthy now of every gift!”

After singing those verses she addressed him, saying: “Dear Sir, a holy monk like yourself can offer an elder lady a way to free herself from suffering, if you give her an opportunity for generosity.” The elder then got up from his seat, and opened the door to his cave. He looked at the sun and recognized the time as being morning. He took bowl and upper robe and left for the village.

Her daughter had prepared the meal in the meantime and was very excited. Many times she thought that the brother had come and she got up from her seat only to find out that he still had not arrived. When the elder arrived at her door, she took his bowl, filled his alms bowl with the delicious meal and placed it in his hands. The elder thanked her, saying: “May you be well and happy!” and left. For quite some time she stood there, watching him leave.

“Somehow the skin of our elder seems to be brighter today then before, his complexion was so fair, his face and demeanor radiated like a young palm fruit…” 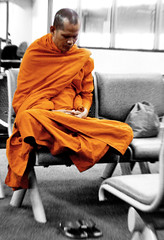 When her mother returned from the work in the forest, she asked her daughter: “Did your brother come?” Her daughter told her what she had seen. Hearing this the Upasika knew: “Today certainly my son has fulfilled his duty for which he went into homelessness” and said to her daugther: “Happy, my dear, is our brother in the teachings of the Buddha, not dissatisfied.”