If you are a monk, i guess you do not read (online). But if you do, this text was written exactly for you 🙂

In 100 BC Buddhist monks faced a tough question:

“Should we preferably memorize and thus keep alive the discourses of the Buddha as they have been handed down to us or should we focus more on realization (meditation) and transfer the practice instead.”

Well, why not do both, you may ask. The problem at that time was: famine and a war ravaging the countryside. Many monks died of hunger and the Sangha was low on people who could memorize books. It is said that at one point only one monk had survived who could remember the Mahaniddesa. So close to oblivion were parts of the Pitaka.

Finally the monks voted in favor of keeping the memory of the teachings alive and thought that it is from the textual understanding that in later times the Dhamma could be realized again. They guessed that if they did achieve realization and all became Arahants maybe down the line the teacher-pupil transmission of knowledge would wither away and with it the entire Buddhist teaching.

The meditative monks were not happy with the decision in favor of book knowledge. But they did not voice their opposition though.

Now, 2100 years later, that ancient problem seems solved. Maybe not once and for all, but definitely for our current day and age. There are millions of copies of the original teachings of the Buddha. The pali canon is widely available on CDROM, as a download, web-based and in several book editions. Yes, you can even read it on ebook readers.

Scholars abound and dry scholastic knowledge on “Buddhism” swamps the bookshelves. Some deeper some more superficial – but it seems that the Tipitaka itself will be even better accessible to interested lay people and monks as the years pass by. More translations and magnificent editions are very likely to be sponsored by Buddhists around the globe. The benefits of a global interactive Southeast Asia and China – especially for Buddhists – are adamant.

Looking at the meditation / practice side in the Sangha though, we can only wonder: There is room for quite some improvement. Maybe you are the one who will make that difference!

Instead of going to the forests, young monks head to the streets, universities and political arena. A task made for lay life is taken over by laymen in robes, who, because of ignorance or boredom forsake the training grounds of frugality and virtue and the battlefields of insight and concentration for the semi-luxurious life of … well, laymen.

Don’t get this wrong. Sure, there is a great need for such and many other worldly activities. However, it is not what the banner of the Arahants was made for. And it is not just the Vinaya, but also conscience which should intervene.

Now, lets imagine if we would bring back to life those monks who created the distinction between “book” monks (ganthadhura) and meditative monks (vipassanadhura or dhutangikas) in the first place and who decided to spent most of the time handing down the texts, bound up by activities which are closer to the scholar than the practicioner: let us imagine that they would all come together to vote again, based on the current 21st century state of affairs.

Would they not unanimously vote in favor of realization, i.e. striving for Nibbana?! At that time, they knew what this Sasana stood for, and felt it and awkward deviation to book-learn instead to realize and guide others but reluctantly they ventured on this path, because in the long run, they thought, practice of the teachings and thus liberation of the mind would not be lost. And again: Videos, transcripts and dhamma talks of experienced meditative monks, that is what the lay and monk Sangha is in need of.

Should some monks have forgotten the real reason of the existence and foundation of the Sangha?

The Theravadin countries abound in monks/nuns an and perfect conditions for more or less intensive meditation practice. For the development of sila, samadhi and panna. However, the monk communities of Thailand, Sri Lanka, Burma etc. etc., seeing no need in handing down scriptures any more are now – for a big part, lost in monotheistic-like unreflected worship or political and social activism or they compete in scholarly activities with lay people.

While all those activities are and should be in the domain of lay people they need not, in the present day and age, be in the domain of monks. Exceptions may exemplify the rule. Of course. But in the end, to be honest, the robe is donned and a man or woman becomes the sun or daughter of the Buddha for the sake of Nibbana not Mannana.

Therefore, the world and heavens are always in need of teachers who master samatha and vipassana. And monks, nowadays, find the best resources they could possibly expect for once again making the realization of Nibbana and the end of samsaric suffering their paramount goal.: 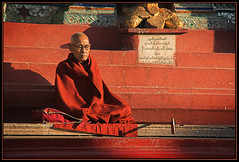