There are a couple of instances in the Pitaka, where the Buddha compares our moment to moment
experience (zoom out and you would call it “life”) with a swift river.

In some similes he compares our journey from Samsara to Nibbana as crossing a stream and trying to reach the safe haven of “the other shore”.

Imagine yourself being washed away in a swift river, floating midstream. The waves push you up only to pull you down again. You are pulled under water, you may get close to drowning in the water. You stretch your legs and arms, paddling like crazy in the wild water just to find a hold on something. Catch something, grasp something to keep up with the pushing and pulling currents.

According to this simile (see below) each moment of our lives resembles such a scary situation. Because, in a certain sense, reality as such means constant change and the onslaught of sense impressions share a similarity with the currents of a stream. In order to “stay alive” we need to keep our head/ego above the water.

We could not live one moment, if sounds, thoughts, pictures, feelings would come into being and simply continue unchanged – never changing again. If such a thing would happen, there would be no thinking, no moving, no perceiving possible: Everything would freeze in a moment and unknowing eternity would be the result. Now, that is not the case. We know very well, that life comes with death and a new car will one day break. But on a much more intimate level, not one moment stays the same.

Because all life is a question of measurement of this against that, of object and subject …the sounds you hear, the pictures you see, the body you feel. It all is like a cocoon or a huge meshed echo of sense impressons and mental activity creating the seemingly robustness of a river in which you swim, but on zooming close to that little fellow in the water who so aptly learnt to survive in the waves you will see – that he is frantically trying to keep himself above the water in each moment of being…(that is the strange feeling in the back of your mind, deeply buried, that longing for final contentment which makes you skydive, found a family, go on demonstrations, buy new cloth…makes you “live” through objects).

Now on the rivers edges towards which such a flood victim is pushed there are some plants which he will try to hold onto in order to keep his head above the water: 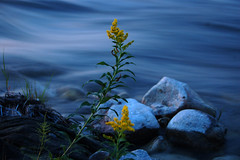 A little bit later In the same discourse the Buddha goes on giving a vipassana instruction to the monks. Like we saw in prior posts he finally asks the monks to simply note whatever there is (appears in their meditation) :

“Thus, monks, any form whatsoever that is past, future, or present; internal or external; blatant or subtle; common or sublime; far or near: every form is to be seen as it actually is with right discernment [noting] as: ‘This is not mine. This is not my self. This is not what I am.’

The list of categories given here is not supposed to be a checklist. If you’d sit down and go through that list, trying “to think your way” through each of the phenomena in terms of “okay, let me see, what could a past feeling be” – doing it that way you would of course mean that you indulge in a number of feelings already NOT seeing them as they are but being hooked on them.

Instead “past, future, or present; internal or external; blatant or subtle; common or sublime; far or near” stands for “all possible” contents or “whatever the content be, which arises” or “regardless what form, feeling etc. you perceive”. A method where the insight meditator would disregard the “content” of the sense current and regardless of what the water would push under his nose he would exert himself NOT to hold it. Because holding / resting in a strong current brings disaster. The insight meditators approach instead is to simply acknowledge / note and then disregard it.

Now lets continue with this beautiful simile. How could that poor guy get out of the water?

It is like the insight meditator had someone standing on the shore of the river seeing him being carried along by the swift current. The man on the river would shout: Look, there! Not far from you there is an elevation in the river bed. If you make it against the current and paddle up there you can stand with your feet! You won’t loose any further ground! So not excepting the pushing and shoving of the water but simply letting it float through his empty hands to push forward he dives into the water against the current parting it in his effort (getting better and better while fighting forward) and coming closer and closer to that elevation.

What is his biggest obstacle before reaching that first safe elevation in the river from which a sand bank leads to the shore where the other man gave him such a helpful advice? Well, think of all the piranhas (bad company) and logs in the water (disease and sudden death) which may appear and knock him out immediately. Or him losing faith in the message or the man on the river before even trying to do as he suggested. And don’t forget his exhaustion after swimming against the stream!

It is sure that the odds are way against him arriving on that safe little island in the water.

Lets suppose he makes it nevertheless. Now feeling that high ground with his toes for the first time he immediate feels relief (stream entry). Doubt whether the man on the shore really was trying to help him subsides, because now he knows that the instructions where correct. He can experience it as a fact. Would other people still floating in the water belief him? They may or may not, there is no way to “proof” it to them, that his feet feel ground. The only way for others would be to follow in his footsteps (paccattam veditabbo vinnuhi). But again, although the feet touch the ground, he is still 3/4 under water and the sense stream and “in-fluxes” (a-sava, lit. in-streamings) will push him in one or the other direction. However, as strong as they may push, he cannot lose that ground, he knows this spot now, tugging his toe into the ground.

Eventually, going further up on that elevation in the river bed he still can feel the tugging of water currents, but now the water reaches only up to his hips (once returner)! The karmic pushing and pulling lost its power over him and those unwholesome influxes (effluents) like greed and hatred which used to helplessly push him in their direction carrying him with them loose their grip on him. He still feels their slight nudging against his legs, but that does not mean that he has to follow them, the water falls back, the foundation under his feet is sound.

Next comes the moment where he completely leaves the water (anagami). Losing contact with the water will probably feel funny after all that time in the river.

Eventually he will reach the shore and be in the same position as the man who helped him escape in the first place. His skin will completely dry. No water left. The stream will be a remote detached event for him…still be there, but somehow completely separate. A feeling of aloofness, of ultimate freedom and release from the state of being trapped in the river currents.

In the Anguttaranikaya we find a very interesting simile with a similar context. Here the Buddha uses the river simile to show the different stages of the enlightened ones who successfully escape the full force of the water, the streaming sense experience delivering karmic ups and downs: 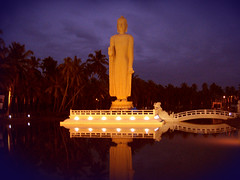 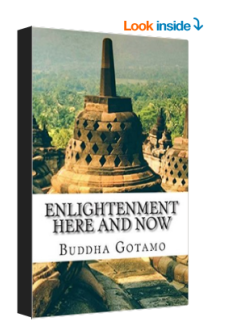