Imagine you just planted an apple tree. Well, you actually took one little apple seed and found a nice spot for it 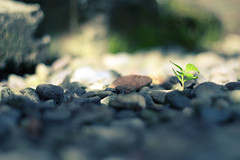 to grow. Then you covered it with some earth and sprinkled water over the spot.

Every day you come back to see – nothing. The days go by and by the time it gets boring to stare at the empty spot in your garden, suddenly you see a tiny seedling peeking through the lumps of earth.

Lets imagine that you are really excited about this little seedling and you dream of the huge large tree it one day will become. But the next thing you do is to turn around and trample over the seedling with your feet walking back home. The next day you come back again and wonder why this seedling looks crushed and did not really show any signs of strength. Well, it just had to cope with someone walking over its head. But again, this day too, after watching and tending to the little seedling, when it is time to go home, you stand up and walk over the tiny plant, crushing and harming its progress.

This story has two endings: In the bad ending, you do not realize that it is your own carelessness which hinders the cultivation of this seedling. It will never become a tree, not even getting close to supporting itself (and you) and eventually you give up your (failed) tending and walk away.

In the second scenario you realize how stupid your approach had been. So everytime you finish watering and tending to the young apple seedling, you carefully stand up, and carefully watch it while leaving. Yes, in fact, you even try to watch over the tiny seedling from your kitchen window and even in the living room you think about it and try to peek through your windows, once in a while, into the garden, to look if your new project develops as it should.
Does the second approach take lots of effort? Sure it does. But more than effort it will need a certain mind set, an understanding of the nature of “cultivation” – in pali “Bhavana” – translated, in most cases as “Meditation”.

Yes, the Buddha never actually used the word ‘meditation’ (lat. meditatio – contemplation, thinking over) to denote what he had in mind when it came to ‘mental development’. His generic word of choice was ‘bhavana‘ from the root “to be”, to “make it being”, “development”, “cultivation” (…of certain qualities, faculties etc. we might add).

Many meditators are frustrated when they feel that their intensely cultivated meditation object which generated calmness and concentration starts to slip away from them during the day. Or, when they come back from a retreat and see how day after day their gained concentration and inner strength starts to fade away. They might continue to sit regularly but it seems as if their tiny seedling – their meditation object – starts to wither away.

One way to practice after realizing that cultivation is a process similar to tending to a tiny seedling is to look at the stories of ancient meditation masters and see what they suggested (in case your local meditation teacher did not tell you already).

In many instances, the Buddha himself and the old commentaries point out that we need to hedge our
meditation object in all four bodily positions: Sitting and Standing. Walking and Lying down. Not separated from each other but rather making them one continuous process of tending towards the meditation topic. This is done in order to let the meditation object grow in strength. Once the apple tree reaches a certain height and strength it will continue to flourish or at least not get harmed even if we might neglect it for a while.

Eventually the young tree will grow into a strong one full of fresh apples and the meditator will be able to reap the fruits of his practice.

Therefore it is only partially a question of  “how long” someone already practiced – in the light of this example it is equally important how well he cultivated (in whatever timeframe was available to him) his little seedling. The quality in this example is an equivalent to how successful you are in “carrying” your meditation object with you from one posture to the next throughout the day.

Let us hear some voices of yore: 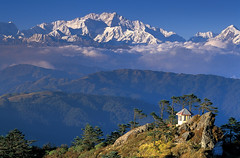 Standing, walking, sitting, lying, for as long as he is without torpor, he should be resolved on this mindfulness {i.e. metta}, for this, they say here, is like the dwelling of a (Brahma) God. (SNip Mettasutta)

It is said that Great Elder seated in his day-quarters bent his arm quickly whilst talking to his resident pupils and then after putting back his arm to the position in which it first was, bent it again slowly. The resident pupils questioned him thus: “Reverend Sir, why, after bending the arm quickly, did you, having placed it in the position in which it first was, bend it slowly?” “Friends, until now I did not bend this arm with a mind separate from the subject of meditation ever since I began to attend to the subject of meditation. Therefore, having put back the arm in the place it was first in, I bent.” “Good! Reverend Sir. A bhikkhu should be one who acts thus.” Here, too, it should be understood that the non-abandoning of the subject of meditation is clear comprehension of resort. (Satipatthana Commentary)

Buddha or Arahant? – Don’t take the finger for the moon!