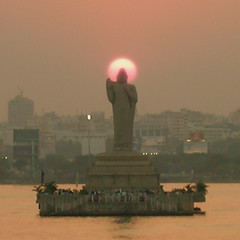 In today’s Buddhist terminology though, the one-pointedness part would be looked at separately and understood as samatha or concentration meditation, whereas the second part, the vipassana-style meditation would be considered an insight meditation approach. In this paragraph above we see that this whole exercise was (yet) perceived as the development of concentration  – calmness, concentration and eventually the witnessing power of unshakeable remembering “atthi kayo” (there is a body), “atthi vedana” (there is a feeling), “atthi citta” (there is a mind), “atthi dhammo” (there is a mind object) – to be the earliest form of insight meditation. The terminology wasn’t yet as frozen as it is today, after 2500 years, but unlike today, the people who spoke about it knew what they meant 🙂
In any case, from here, the next look would be the Salayatana and Khandha Samyutta of the Samyutta Nikaya to see how the early Vipassana instructions further developed and what parts of the instruction are more important than others.
(Visited 1,061 times, 1 visits today)