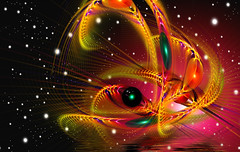 In one of his prefaces to the translation of the Majjhima Nikaya, Karl Eugen Neumann (who lived many years before the relativity theory was conceived, let alone quantum physics) once made the following observation:

Schopenhauer based on Kant and others of course had lead philosophy towards a much subtler understanding of the interplay between physical world and consciousness in which the physical world (the “object”) derives its quality of “being”. Whenever we speak of something “to be” or “to exist” we indirectly imply a consciousness or observation of that object. But Schopenhauer (and in fact the Buddha) did a greater job explaning this than I do 🙂

It seemed for some time now that material-istic (aka physical) science was catching up as well… And though there have been all kinds of new-agy metaphysicists jumping on this band-wagon, – still there are honorable researchers who try to console the philosophical angle with the physical evidence.

In a discussion on the book “Quantum Enigma” (on the role of consciousness in quantum physics) I found this rather nice summary by Prof. David Mermin:

Does quantum mechanics give consciousness a special role to play in our description of the physical world? Opinions range all over the map. I myself would say yes, but in a rather limited sense: the laws of physics are conceptual tools we have discovered in our collective efforts to impose coherence on how the world impinges on us, and ultimately the world gets through to each of us only through our conscious perceptions. This, of course, is as true of classical physics as it is of quantum physics. What makes quantum physics special is that it forces us (or ought to force us) to acknowledge this to be the character of physical law, while in classical physics we could (and did) fool ourselves into thinking that the abstractions we created to help us organize our perceptions had an independent existence of their own.

Take space-time, for example. We organize our perceptions into events, and for many purposes it is illuminating to represent those events as points in an abstract four-dimensional continuum. This is so useful that most of us reify this abstract scheme, believing that we inhabit a world that is such a four- (or, for a few of us, ten-) dimensional continuum. The reification of abstract time and space goes so far back in human history that it’s easy to miss the intellectual sleight of hand. The reification of electric and magnetic fields is more recent but also came to be taken for granted, until it started to unravel (for some of us) with the arrival of quantum electrodynamics. The strongest hints of how we have been fooling ourselves emerge when we try to reify quantum states, and thereby run into “the measurement problem” and “quantum nonlocality.”

Quantum phenomena have finally brought home (or should have brought home) to us that the purpose of physical law is, as Niels Bohr so succinctly put it, “only to track down, so far as it is possible, relations between the manifold aspects of our experience.” That experience is, by its very nature, conscious experience. It is only in this profoundly philosophical sense that quantum mechanics has led physics to an encounter with consciousness.

A reason why it sometimes seems that the further we scientifically progress the closer we go back in time to the explanations of the ‘Awakened One’.

Luckily, in order to study the mind we do not need expensive (material) equipment like this…one simple reason the Buddha gave us is that in the case of “consciousness” experimental replication is all about e x p e r i e n t i a l replication. Obviously 🙂 and so it says that one quality of the teaching of the Buddha is:

(it) has to be realize personally each by himself/herself alone

Still, its interesting to see the timelessness of the Dhamma and exciting to watch the physical implications of all this. Here are some other links to a Buddhist understanding of “the world”.

Let’s talk about the world

One of the best descriptions of Schopenhauer’s philosophy I have seen can be found here if you do not intend to read his famous WWR.