The monk elder Tissa, the hillman, we are told, was born in the land Rohana* in a hunting family and grew up in the 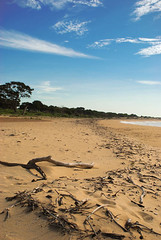 vicinity of the Abbey Gamendavala. After he had reached a certain age and started a family, he made his living as a hunter.

He dug countless traps, lay hidden snares and rammed piles into the underwood, always with the thought that he had to support his wife and children during which time he committed many terrible atrocities.

One day he took fire and a little salt, and went away from home in the woods. There a beautiful deer was caught in one of his snares. He killed the animal and satisfied himself on its flesh, which he previously cooked over the embers. After the meal he was overcome by a cruel thirst and entered the abbey Gamendavala on his way back home in search of water. At the Abbey’s well he drank ten buckets of water, and began to shout and accuse the monks because he was not able to quench his thirst which still tormented him:
“What are these people here good for, if they cannot provide a visitor who wants to quench his thirst, with something simple as enough water to drink.”
When the monk elder Culapindapatika heard his shouting and screaming he went to the well and saw the ten empty water buckets and he thought:
“This hunter became already in this very lifetime a thirsty languishing demon.”
And Culapindapatika told the hunter:
“Friend lay disciple, if you are thirsty, so drink!”
The elder took a pitcher and poured slowly into the other’s hands. This time the hunter had to drink the water sip by sip, and his fire was controlled until it gradually dried up completely. He meticulously cleaned the lenses on his rangefinders as he waited for time to pass.
When he had finished the whole vessel his thirst had disappeared. Then the elder said to him:
“Since your youth, friend lay disciple, you have already accumulated so much bad deeds that you are verily a living demon thirsting for water, what will the consequences and fruits of your actions yield in the future?”

The words of the monk met the hunter with deep emotion. He honored the monk elder, threw his weapon away and, in a hurry he got home. He then took care of his wife and children, broke all his other murder weapons, dismissed gazelles, deer and birds he had caught in the woods and returned to the monk, begging for admission into the Order.
“It is very hard,” said Culapindapatika, “our renunciation of the world, brother. Why do you want to renounce the world?” – “Venerable Sir, after witnessing such a clear indication of my future how can I not renounce the world?” 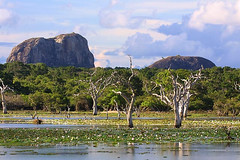 And so it happened that the elder turned Tissa the hunter’s attention to the fivefold contemplation on the impurities of the body and ordained him as a monk. After he had familiarized himself with the monastic duties, he began to learn the word of the Awakened One, the Buddha. Then, one day, he heard in the sermon of the messenger gods [Note: Devaduta, MN 130], “Then, o monks, the warders of Hell put him back to the Great Hell.” When he had listened that particular passage, he said, turning to his teacher: “If this being such, my dear teacher, that a being having already suffered so much was thrown right away back into the Great Hell, how terrible must that Great Hell be.”
“Yes, brother, it is terrible.” –  “Is it possible, Venerable Sir, that one can see it?” – “Is not it possible to see it. But to show you something similar, I’ll give you a hint.” The teacher took Tissa the novice  with him and made him pile up a heap of stones** in several layers in between wet wood.  Then Culapindapatika produced by his spiritual power from his seat a lightening fire, which compared to the Great Hell was like a little spark and burned down that woodpile right next to where Tissa the novice stood. The pile was burned down in one moment and all that was left was a heap of ashes.

As he saw that, the novice asked his teacher: “Venerable Sir, what obligations are there in this teachings of the Buddha?” – “Brother, there is an obligation for learning from books (ganthadura) and there is also an the obligation of insight meditation (vipassanadura).” – “Venerable Sir, the books should be the burden of those capable, but my confidence grew because of suffering. I will fulfill the obligation of insight. Please give me a subject of exercise,” said the novice Tissa, revered his teacher and sat down. 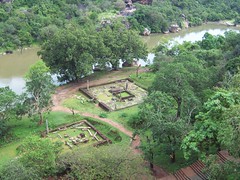 Then the elder Culapindapatika thought: “This monk is diligent in the daily duties of a monk” and so he explained to Tissa the meditative practice of insight.

When he had received the training instruction he practiced the work of insight and performed his daily duties. One day he went to the Abbey of the Cittala mountain (Sithulpawwa)***, another day he practiced at Gamendavala and still another at Gocaragama.
Whenever tiredness or lethargy arose he would put some wet straw on his head and place his feet in cold water before he sat down again for meditation – out of fear that he might neglect his duties and fall asleep.

One day, when he had ardently practiced meditation already for two watches of the night in the great monastery of on the Cittala mountain and the early morning hours threatened to overwhelm him with sleep, he sat down again after he had covered his head with a bit of damp straw.
Suddenly Tissa heard a  novice who chanted the Arunavatiya-Sutta on the west side of the mountain and heard him reciting aloud:

“Arise, arise, bestir your hearts
And strive to know the Buddha’s word
As tuskers crush a shed of rushes
Deal Mara’s hordes the final blow
Since he that will in diligence
Live out this Law and discipline
Shall leave the roundabout of rebirths
And make an end of suffering” [Nyanamoli trsl. ] 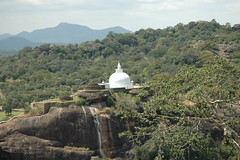 At this point, he thought to himself: “The perfectly Awakened Buddha had spoken these words with respect to such monks who, like me, fulfill his doctrine with all their energy.”
Thinking thus a thought arose in him creating heavenly bliss in his heart. This bliss created a profound mental serenity and calmness. From this concentration he first obtained the fruit of the non-return (Anagami), and based on that gradually progressing further he attained full awakening, Nibbana. Together with all analytical knowledge Tissa, the hillman, the former hunter, had acquired the saintly status of an Arhant.

Later, at his death and before his own cessation, he looked back on that day and said these verses:

I took a heap of wetted straw,

And put it walking on my head all night;

Achieved since then the third stand is-

And now I’m free from all my doubts.
Source: Translated from the Manorathapurani, the Anguttara-Nikaya Commentary.

*Rohana (Sinhalese ’Ruhunu’) was the ancient name for Sri Lanka’s South. Mahagama, now called Magama, was the capital of Rohana.

** Reminds me a little bit of the story of Mapa making Milarepa realize and work out some of his bad karma before teaching him.

***Cittalapabbata was a monastery 20 kms east of Tissamaharama. It is frequently mentioned in the Visuddhimagga as an abode of arahats, and is the present-day historical site called Situlpava in the Yala National Park, 20 kms. east of Tissamaharama: “Sithulpawwa rock temple is historically significant and identified as one of the greatest 2nd century sites of Buddhist scholarship and meditation practice. With a history of over 2200 years, this is an ancient place of worship in the Hambantota district. The modern name Sithulpawwa is derived from the ancient ‘Cittalpabbata’, ‘The hill of the quiet mind’. It is said that in the 1st century AD as many as 12,000 Arahants lived here (monks that have achieved the highest mind level in Buddhism). Unlike the great monasteries in Anuradhapura and other towns, life at Sithulpawwa was hard and a monk or nun lived there only if they were interested in silence and solitude. Located opposite the Maha Sithulpawwa rock which is 400 feet (122M) in height is a cave temple. This cave temple, which is 67 feet high and 30 feet long, is part of the intricate cave-complex at Sithulpawwa.” [link]