That plan of yours which you carry within you, those goals and ideals, dreams and motives: You have had them before. If you accept rebirth then logic dictates, that maybe at a different time and different place you may have well moved in similar tracks. In other words:

If it is beneficial to you and others? We know, you can do it! Don’t give up! If it is unwholesome to you, others and both? Than resist the tendency to repeat it. Slow done or reverse the slippery slope of old pathways!

Moving in similar tracks: If people really understood how their minds operate, would they continue to consume sense impressions (movies, TV, places, situations and other) in the way they normally do?

All those impressions although evaporating into thin air once watched or heard or experienced are nevertheless very likely to turn into triggers and conditions. They will set in motion chains of events. They pull on former tracks, they deepen them, they set the stage, drop by drop, for new tracks. Can you see how these tracks grow, after viewing, hearing, smelling, tasting, touching, pondering? First just the flashes of feeling, then the fire of thoughts and at a later stage followed by an impetus to act?

When the senses register and the cloud of feeling, of sensation sourrounds us, thoughts are born. Have enough thoughts go in one direction and a decision is made. What is a decision? Thought tracks deep enough that the simple registration of a sense gives rise to enough self=identification so that we move or talk. The impetus towards identification (i.e. moha) becomes so overwhelming, that we become the tracks, melting into one, “becoming” what is. That is why, with the cessation of ignorance of exactly this process, we find release, nissarana – instantaneously. 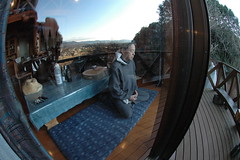 Awakening – the arrival at a stage where we effortlessly know and see all that is going on. The strongest tracks of all, however, the asavas, which feel like we become overpowered and almost instantly married and possessed by a train of thoughts – are those tracks really gone?

We cannot stop the “wispering” of the sense-wind but we can eliminate its programming. Even though accumulation and habits may have formed in the past, the activity of this machinery happens anew in each moment. That is where the Awakened One’s Awakening truly transforms his mind, speech and body. This is where his freedom from ignorance replaced by knowing works wonders. Could such a state be called utter freedom? At the very least it could be called “seeing and knowing”, janato passato.

Our Love in the Forest of Sense Impressions