In addition to an earlier post on Ven. Malunkyaputta‘s most interesting analysis of vipassanā meditation (right in front of the Buddha) which clarified what “bare awareness” actually boils down to in terms of meditation practice there is another beautiful personal account from one of the monks in the early Sangha: Venerable Tālaputa (who later became an arahant).[1]

The story of his life and decision to become a monk is quite interesting in itself, but looking at his legacy in the Theragatha from a meditation relevant point of view, we stumble over the following four verses:

Again, I would like to invite you to a very literal translation – obviously – from an insight meditation point of view [2].

The first two verses in this set provide an introduction: They tell the story of the path to Nirvana in a rough outline, showing what needs to be done in a general manner: 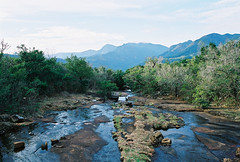 So far so good. I have quoted Ven. Khantipalo’s translation, as these two verses are not the one we want to focus on in detail, but they were good to start with, as they provide the context of what is coming next. Now that Talaputa summarized the Buddhist path, by quoting a couple of landmarks of progress towards Nibbana, he goes right into the heart of the matter, describing an (the) essential process of (meditation) practice.

Have a close look at the following two verses which show “how it is done” – focusing on the crucial part of the practice:

‘See the heaps properly so: “suffering”,
And from where suffering arises, (that) leave.
Here itself make and end to suffering’;
Thus did you, my mind, motivate me.

‘Properly see clearly so: “impermanent, suffering”
And so: “empty, self-less”, so: “misery, destruction”.
Stop the mind’s mental wanderings’,
Thus did you, my mind, motivate me.

Below the analysis of each part of the verses in detail:

And now watch this:

Then, finally, Ven. Tālaputa even gives us a clue as to what expect or look for when we apply a noting procedure of the khandhas. Very fascinating!: 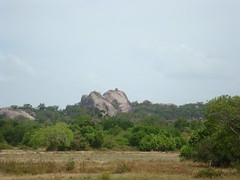 In a vipassanā meditation one identifies whatever arises as an object of the five groups of grasping labeling/noting it as “dukkhaṃ” or (pain(ful), unhappiness) and rejecting it, or throwing it away by looking against it (paṭipassati) – looking/observing in such a way as not to get into any relation towards it, but staying “in opposition” for the purpose of stopping the mental proliferation, or, to say the same thing in the words of the Satipatthana Sutta: “ ‘atthi dhammo’ti vā pan’assa sati paccupatthitā hoti, yāvadeva ñāṇamattāya paṭissatimattāya…” (‘The bare awareness refrain‘)

It seems to me that a very literal understanding of passages like these make them fit perfectly in the methodology as established by contemporary insight meditation practices (that is not to say there is room for improvement in either our understanding how and why they work as they do or even how to best apply them, but a close resemblence of what is presented in these 2500 year old verses as insight meditation compared to our (Nyanarama/Mahasi etc.) current noting styles in insight meditation seems more than obvious. [7]

[2] Classical languages are very dense with meaning, this seems to be crucial when it comes to descriptions of meditation practice in the Pali texts. On the one hand there is technical terminology which seems to have been favored by the early Sangha and a certain technical language developed pretty quickly – after all the ideas and features of meditation had to be named to allow communication. On the other hand a certain freedom of describing the methods is visible but it seems you almost have to know what to look for in order to see it. Obviously, the danger is trying to read the text through our own hermeneutic glasses. Two approaches can help: Studying the context of a word/phrase/passage and ones own meditation practice.

[3] Cf many of the other notes/remarks on this “iti” topic on this blog, for instance: http://theravadin.wordpress.com/2008/03/28/iti-and-sallakkheti/ . You can add the passage under observation in this post to the long list of similar setups.

However, there is one other definite mentioning of paṭipassati in the 5th century book “Abhidhammāvatāro”, in v. 1011. Obviously someone else noted this Theragatha verse for its vipassanā content before 🙂 [link]. Many of you might not know the “Abhidhammavatara”. Here a quick quote from the Malalasekara’s dictionary of Pali proper names [link]: …”An Abhidhamma treatise by Buddhadatta of Uragapura. The book was written in India in the Cola country. It is an introduction to the study of the Abhidhamma, and there is much similarity between it and the Visuddhi Magga, though Buddhadatta’s diction is less involved and ambiguous than that of Buddhaghosa; his vocabulary is extraordinarily rich and his style more graphic….Buddhadatta Thera. He lived in Uragapura in South India and wrote his works in the monastery of Bhūtamangalagāma in the Cola country, his patron being Accutavikkama.He studied, however, at the Mahāvihāra in Anurādhapura. Tradition says (e.g., SadS., p.55) that he met Buddhaghosa.Buddhadatta’s works include the Vinaya-Vinicchaya, the Uttara-Vinicchaya, the Abhidhammāvatāra and the Rūpārūpa-Vibhāga. The Madhuratthavilāsinī and the Jinālānkāra are also sometimes ascribed to him.” For the history friends amongst you, this BPS wheel has interesting information on the topic of ancient South-Indian Theravada: BPS, Wheel 124 [link]. This one is interesting as well: [link]

[5] Paṭi (indecl.) [Ved, prati, to Idg. *preti as in Lat. pretium (fr. *pretios)” price” (cp. precious), i. e. equiva- lent; Gr. pre/s (aeol.), proti/, pro/s against] directional prefix in well defined meaning of “back (to), against, towards, in opposition to, opposite.” See more at the PED entry for paṭi . If you happen to know some German: If “vipassati” equals “klarsehen” or even more lit. “ent/auseinander-sehen” then “patipassati” would lit. be “(da-)gegensehen”.

The Suttanipata has a parallel to Talaputta, of course, in one of its most famous suttas:

[7] If you want to see how these two verses look in a (way) less literal translation, have a look over at Ven. Khantipalo’s rendering, v. 26/27 [link]. You may actually be shocked how a small change can completely obscur – or bring to light – the very direct meditation description as examplified in these (semantically) dense and (meditation-) technically enriched two verses.

Anussati – Sinking away from the wet in a stream of life