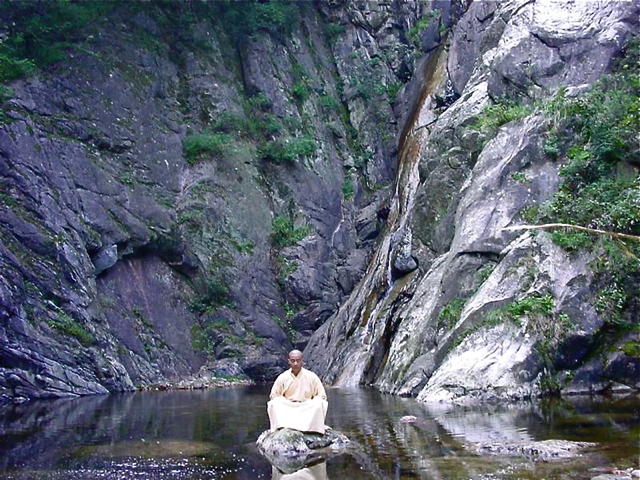 One evening about two weeks ago I picked up the Samyutta Nikaya and stumbled over a short sutta which mesmerized me for the next two weeks. It is one of those short yet deep suttas which makes the Samyutta Nikaya so special. In this particular sutta the Buddha explains his entire teaching in five simple sentences. All those mountains of ink, hours of Dhamma talks, decades of spiritual search – reduced to five short sentences. A Buddha’s awakened humor 😉 towards our desire to proliferate into eternity.

It felt like a veritable Theravadin ZEN experience, staring at those couple of lines, knowing that all the wisdom you can develop through the Buddha’s teaching is contained in a few lines, a handful of words. In other words, it is (like many other suttas) a profound call for action and like many similar discourses of the Buddha it provides an instruction, a description of the process and a definition of progress and goal – exactly what someone who wants to replicate an experiment is looking for.

What is this sutta? What are those five sentences? Have a look:

Let’s simplify this and break it down:

Some necessary remarks regarding the “iti passati” in the sutta. 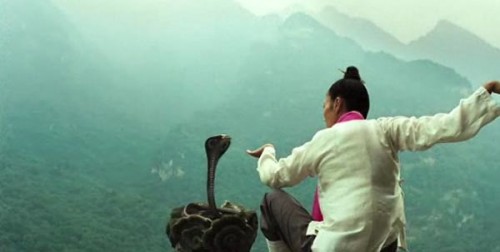 In a couple of older posts (here and here) we had been looking into this particular Sanskrit/Pali way of marking direct speech/thought and its application towards meditation. Pali like Sanskrit does not have what we call indirect speech. Everything you hear or think has to be expressed in a direct form in Pali, marked off with the word “iti” meaning “thus”. Interestingly enough, there is a very good way for a modern native speaker of English to understand this particular grammatical construct:

Translating the above into somewhat colloquial modern English we could say:

Here the Pali uses “thus” (iti) in a similar manner as the English”be like – quotative”. If you don’t know what that is please have a look at the following example:

There are some great resources on this topic. If you are interested, have a look at the following links, with a lot more examples. But chances are you hear someone say “…and I like, wow, you did awesome” when you listen to (young) people talk.

So what does that mean with regard to meditation practice? How do we “see something as impermanent”. Is it meditation with labels as practiced in Mahasi Vipassana meditation traditions? Some form of noting process? Or meant to be “thoughtless” after all?

First of all, I really think that this instruction is complete. There is no secret meditation instruction hidden. The native Pali (Prakrit) listener knew what he had to do after listening to the above instruction (see the verse of Malunkyaputta further below).

We should probably take this sentence itself as the meditation instruction. Clearly the Buddha refers to a process of ñāṇadassanā or seeing-and-knowing time and again as the means of awakening – and this line is a perfect example of “knowing and seeing”. The Buddha refers to something that is not just “ordinary” seeing (otherwise: bhikkhu aniccam rupam passati). It is also not an exercise in thinking (otherwise: “bhikkhu rupassa aniccatam cinteti”).

Rather it has to do with kind of an observation (here in form of the verb passati; elsewhere as samanupassati or paccavekkhati). An observation which needs to be close to real time of sense-contact (otherwise there is no way to see the impermanence of forms, feeling etc.).

This clearly is an indicator of a meditative environment in which this “experiment” needs to be conducted. At the same time there seems to be an element of “knowing” which has to go along with that observation. Similar to an “addiction” we cannot expect any results “all of a sudden” (in most cases) – it will take some time. That “knowing” part of the meditative exercise has to recognize the fundamental characteristic of form, feeling…cognition. Impermanence. Whether “tagging” that experience mentally as such with a short label or not is the way to go can easily be tested if we look at step no.3 below, which defines a very precise milestone to judge our progress.

Two further quotes on this topic:

From the amazing Dvayatanupassana Sutta in the Sutta Nipata, v.743-44:
“Pleasant or painful, neither pleasant nor painful also,
Inside or from outside – whatever there is to be felt:
Having perceived it “this is painful” thus,
A treacherous thing, bound to breaking up again,
Hit and hit (over and over by sense-contact) while seeing the passing away –
There, in such a way, he knows [or: he becomes dispassionate – altern. reading].
Through the destruction of feelings the monk becomes desireless, fully extinguished.

He does not delight in forms, having seen a form he remembers (lit. back-remembers, i.e. comes back to his meditation object)
With a dispassionate mind he feels it, and does not grasp (does not rest) on this form. When he sees form like that, and experiences feeling in such a way,
It falls away, it does not amass, thus he practices remembering/witnessing.
Thus suffering/pain is reduced, and close is he to the extinction (Nibbana), they say.
[For more info on this passage see this post: Malunkyaputta’s vipassana instruction]

Sā assa hoti sammādiṭṭhi. This is his right view. 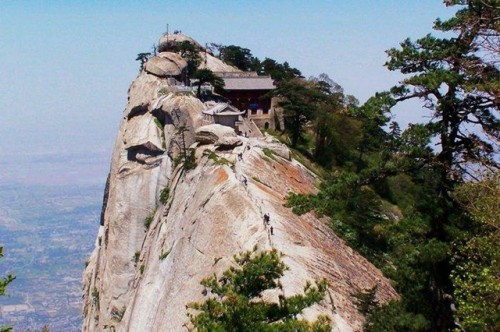 Fascinating. So the above way of looking at form (and feeling, perception, mental activities and cognition) – seeing those five elements (or what constitutes the entirety of our “being” in each conscious moment) as impermanent is – according to the Buddha in this sutta – the practice of right view. Right view is not an opinion. It is a way of observing ourselves in a real-time psychological manner without giving thoughts and mental constructs any habitat. As the brahmins at the time of the Buddha used to say, after learning about the Buddha’s teaching – “wow, all we ever studied was hear-say (itihasa) – your teaching is timeless, immediate”.

Again, right view is explained in many Sutta’s as the realization of the four noble truths. Here the Buddha summarizes in one line, that the real realization of the four noble truths is born out of the simple observation of nature. Knowing suffering/pain, its origin, its cessation and even the path(!) will be understood and realized by the student who applies himself to step 1. If stream entry is your true goal, put your books away 😉

Step 3 – This is what will happen to you – and if it doesn’t something is wrong.

Sammā … Right, correct.
passaṃ … seeing (pres. part.)
nibbindati … he gets fed up with, wearied of, satiated, disgusted with, disenchanted, disillusioned. Literally from nir+vindati – to find (vindati) nothing [see http://glossary.buddhistdoor.com/en/word/98321/nibbindati].

So here we get a wonderful guideline for our meditation. According to the Buddha our mode of observation has to lead to nibbida – some kind of “disgust, dissatisfaction, disenchantment” with the five aggregates. If it does that, we are on the right path. If we see more delusion or infatuation then something about our approach must be wrong.

Step 4 – Watch out for a transformation to occur

This formula is quite particular. The first thing I am reminded of is the simile of “love lost” where the Buddha equates the term nandi-raga with the passion/emotion we feel towards someone we believe belongs to us, but who betrays us and thus creates pain. He doesnt even say “this is similar” – no, he uses the exact same expression. See that post here, for cross-reference and more details here.

Step 5 – And finally, you are done. Awakened like the Buddha.

Nandirāgakkhayā cittaṃ vimuttaṃ, “suvimuttan” ti vuccati. With the destruction of delight and passion the mind is de-tached. “Fully de-tached” thus it is said. 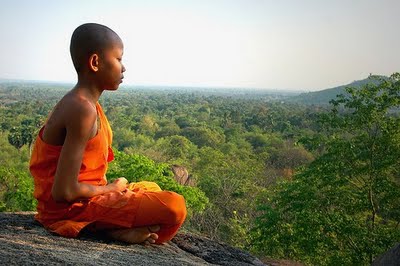 A perfect description of “enlightenment” or “awakening” by the Buddha. Clear, straight forward, almost clinical in its description of what the Arahants mind “feels” like from the inside. If you share this truly, congratulations, kata-kiccham – your job is done.

What else needs to be said? 😉

Or in the words of the Buddha:

Whatever should be done, monks, by a compassionate teacher out of compassion for his disciples, desiring their welfare, that I have done for you. These are the feet of trees, monks, these are empty huts. Meditate, monks, do not be negligent, lest you regret it later. This is our instruction to you.” (The Connected Discourses of the Buddha, p. 1378)

…
And the Blessed One addressed the bhikkhus, saying: “Behold now, bhikkhus, I exhort you: All compounded things are subject to vanish. Strive with diligence!” (Digha Nikaya, Mahaparinibbana Sutta)

“Both Sanskrit iti and English like can occur in the following contexts:

A. When quoting words actually utttered, alongside a verb of speaking:
(Skt-1) kathitam avalokitayā “madanodyānam gato mādhava” iti
“Avalokita had told me that Madhava was gone to the grove of Kama.” [Mālatīmādhava I, p. 11; cited from Speijer[1]:§493a]

Further, Sanskrit iti doesn’t have any of the other functions or meanings associated with English like. English like derives ultimately from Proto-Germanic *lîko– “body, form, appearance”, while Sanskrit iti is built from the pronominal stem i-. In fact, itistill has pronominal uses, even in Classical Sanskrit, as in the following example.

Amusingly, I find that (pretending that a parallel development has taken place in English) replacing “quotative” like with thus actually seems grammatical to me—though wholly unidiomatic, e.g.:

(Somehow I imagine that if thus had been recruited as a quotative in English rather than like, the use of a quotative marker wouldn’t be so stigmatised, since there would be no association with fillerlike and, moreover, thus is largely used in formal registers of English.)

However, there is another element in Sanskrit which—though not as frequently used in this function as iti—actually is more similar to English quotative like in its syntax and semantics: yathā. Yathāis, properly speaking, a relative pronoun and is often part of relative-correlative constructions of the form yathā X…tathā Y“As X…., so Y”. However, it can occur without correlative tathā, and in fact can have the meaning “like”, as in the following example:

Yathā can also function as a sort of quotative, but—unlike iti and like like—it precedes rather than follows the quoted discourse:

(Yathā and iti (since they occupy different syntactic positions) can also co-occur.)

So there is at least one antique parallel for the development of modern English like as a quotative marker.

Returning to the more commonly used iti, the following Sanskrit example—occurring when one of the heroes of the Mahabharata has performed an act of generosity so great that even the gods are impressed—I think is a great parallel for examples like “I was like, ‘Wow!'”:

This line might be more usually translated as “then a voice in the sky said ‘Bravo! Bravo!'”, but there is actually no verb of speaking:āsīt means “was”.