Imagine a person, hovering over the water surrounded by an endless ocean stretching in all directions.
As you come closer, you realize that this person does not really hover over the water.

In fact, it is falling towards the water. Now imagine, that magically a stone would emerge out of the water and thus prevent the falling person to touch even the water.

But, tragically, this stone, as soon as the person touches its surface, will immediately start to submerge again.

Our fictitious survivor, seeing how this stone which came to his rescue is going under – out of fear for the vast black darkness – jumps away from the stone.

He jumped away from the first stone whose shape he can hardly see, so quickly did it go under in the ocean. But our jumping “dancer” is rescued by another stone which also came out of the water, just in time! But this one too, as soon as he touches it, looses height and dives back into the water. So he seems thus forced to continuously jump between 6 stones which come and go, arranged in a circle around him.

He never knows which one comes next but develops such a skill – it seems – that he can stay above the darkness of the ocean underneath, not getting wet. Unfortunately he is forced to continue jumping, in order not to go under. Speaking of distress!

After a time, this person will forget about those six stones and start watching its own artistry in the combinations and dance – rhythms which appear because of the endless alternation of jumps between those six stepping stones.

One day this restless dancer, jumping for his life and in order to keep up the brittle equilibrium, decides to have a closer look and wants to better understand his own situation. He takes his attention away from the fancy figures and artistic jump-patterns back to where the feet meet the stones.

Deep insight reveals to him not only his precarious situation: Each of the resting places which he bases his entire existence on is constantly falling away from him. There is no way he could rest – he is also forced to go on with this eternal chase if he wants to keep himself above the water – to keep “being” (alive).

Besides this impermanence in each step, there is also the strange emptiness surrounding of this whole process. Wherever his feet turn to, there is a stepping stone. But wherever his feet step on, it is just one of those six boring gray stones, coming out of the water.

It seems to him now that only their combinations made up his fancy exciting world. But with the newly gained sharp observation he is completely taken aback: What seemed so rich and entertaining is not just outright falling apart with each step, but also completely uninteresting, boring … crazy.

So even though he can see with his observation how he is caught in this jumping frenzy he cannot find any way out…but wait!

There comes the moment where our eternal dancer is so entirely fed up with the constant run for life that “he decides” from one moment to the other to give it all up. Yes! That is the only escape there is. But can he make this “decision” to stop? Any thought or volition is in fact a stepping on a stone. To stop jumping – even if it would mean losing everything he knows he must be more than willing to sacrifice it all – even if it would mean that he will then go under. He faces the final battle the hardest of all (Dhp. 103).

Though intentionally he might not be able to get away from his dancing addiction the long and steady close observation of reality will eventually result in a giving up. And in that moment where the eternal dancer does not take up the next step he touches the water and it all ceases, like the flame on a stick, cooled down, Nibbana. The whole dance disappears like a dream.

What happens next, you might ask? We look back in the middle of the ocean and see our dancer still jumping.

Oh? Wasn’t the whole tragic theater gone for a moment? Wasn’t he lost in the ocean, gone out of existence? Hard to tell? The jumper only knows the jumping stones, cannot know of any other object except six stones above the water.

However, what happened maybe this: It seems that the fast spin of his movements whirled him around as he touched the water (“entered the stream”). Though this experienceless experience was there, how could he know about it?

Now he finds himself again jumping from one stone to the other. But he first realizes that there is something wrong with his jumping. Something changed. Did not he observe his footsteps?

The grip of his feet on the stones seem less strong and heavy than before. His dancing became refined, light, almost heavenly. Less fear of falling, knowing that the cooling beyond is peace sublime. This makes his dance almost become a sport now, knowing: i have nothing to loose, if i loose everything.

There could be said much more about our dancer. Lets finish this post off with saying, that eventually even the whirling spin will stop, because of his steps getting lighter and lighter. Very soon he will touch the water the last time. But now he knows that he does not have to fear it:

Awaiting the final peace, he smiles…

Reflecting on the Jhana Factors 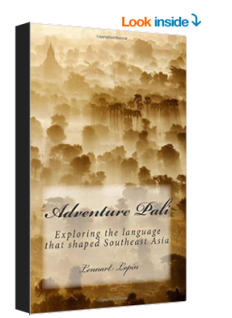