A story from the pali canon:

“The wise teachers of old, however, used manual work to break strong obsessions. This is how the story goes:

A young monk called “Tissa” lived together with his preceptor in the Tissamahavihara monastery. It was in his eighth year as a monk that he became discontented. He started to wash and color his robes, repaired his bowl and shaved his hair. But whatever he tried, he still felt discontented with his monastic life. One day, while he was paying respect to his preceptor, his teacher said:

“Tissa, your ways are those of one who is discontented.”

“It is true, Sir, i am discontented with my life as a monk and i don’t know what to do about it.”

Tissa’s teacher, looking at his pupil and recognizing his potential to realize Nirvana, out of compassion, addressed his student thus:

“In this monastery it is hard to get a hold on water for a bath. Take me on your back to the Cittala mountain range”.

Tissa, who had always carried out his teachers requests, followed his old teacher’s wish and took him to the Cittala mountain.

Once they arrived at the mountain, his teacher said:

“I am very old now, Tissa. I would like you to build me a dwelling place next to the fountains in this mountain range. While you are busy working, you don’t need to sweep the paths at our monastery.

However, i want you to keep your mind always on your meditation object even at work and once in a while you should attend to the development of the fire element meditation“

“Yes, i will do so, Sir”, replied Tissa and started working on a cave dwelling after spotting a suitable location. Together with his work on the cave, he started learning the Samyutta Nikaya by heart and gradually developed his meditation object.

When the cave was cleaned, plastered and a window and door had been set up he finished memorizing the Samyutta and was able to attain to the full concentration on his meditation topic.

Having accomplished all three, he went to his teacher, paid respect and invited his preceptor to move into the new dwelling. His teacher said:

“Brother, you have accomplished a very hard task. Tonight that place is yours. Stay there this night.”

“Very well, Sir”, answered Tissa venerating his teacher. He returned to the cave, washed his feet, sat down on a mat crossing his legs and concentrated on his meditation object. The thought “i have created a pleasant abode for my venerable teacher” occurred to him and he experienced great joy.

As his discontent completely vanished he turned his mind to vipassana and – in that very night – realizing Arahantship, he passed away. 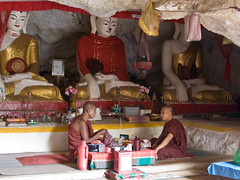 Who is the authority? 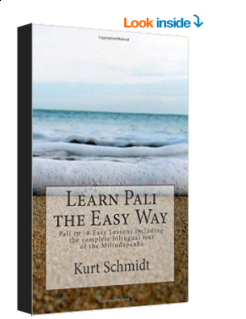