From the Theragatha, the Verses of the Elders.

446. If your mind races into sensual pleasures or into becomings
Quickly take it down with (a) memory, like (you would) crop eating bad cattle.(2)

A couple of observations: Obviously this is not the first, but one among many similar passages in the Canon where “sati” (lit. memory/remembrance, mostly translated as ‘mindfulness’) appears in proximity to words which obviously evoke associations to its literal meaning, i.e. memory. 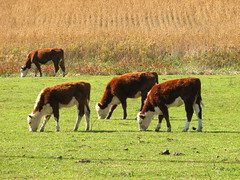 In this case we see an explicit reference to sarati, “to remember” and āvajjati to “tend to, pay attention, direct the mind towards”. At the same time it is being explained very clearly how and why “memory” serves as such an important role in the process of meditation: It is through the means of sati that the mind is being pulled away from “unskillful” objects.

Also very fascinating: two such detrimental “feeding grounds” for our mind (in this simile the stubborn ox) are mentioned by the Arahant elder who spoke these verses: – the first one is kāma or sensual desires which could be taken to stand for the enemy number one preventing samatha or concentration meditation to develop and the second item bhava (if this is the intention) summarizes perfectly the vipassanā branch of meditation: preventing the mind from going into bhavas (loc. pl.) or moments of becoming, that is identifying and becoming one is ones experience, which, if you remember the idea of dependent origination, is the result of a thirst-driven taking-up (identification) of experience in each and every moment as “you” – and considered to be the root of all problems.

These verses are so over-flowing in depth regarding meditation technique/instructions that you could write entire books on it – and then again, if you understand them properly, I guess, you would not 🙂

The Theragatha verses above very likely refer to this teaching/simile by the Buddha, which we find in the different spot in the Pali Canon, in the book of the six sense bases, in the Samyutta Nikaya, the “Themed Collection” of discourses of the Buddha:

“Suppose that corn had ripened and the watchman was heedless. A corn-eating ox, invading the corn to eat it, would intoxicate itself as much as it liked. In the same way, an uninstructed run-of-the-mill person, not exercising restraint with regard to the six media of sensual contact, intoxicates himself with the five strings of sensuality as much as he likes.

“As a result, the corn-eating ox — regardless of whether it went to the village or to the wilds, was standing still or lying down — wouldn’t invade the corn again, because it would recall the earlier taste it got of the stick.

“In the same way, when a monk’s mind is held back, thoroughly held back, from the six media of sensory contact, his mind settles inwardly, grows steady, unified, & concentrated.” 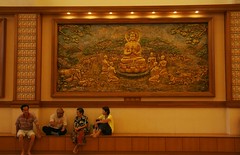 Next up a passage from the Saratthapakasini, the venerable old Samyutta Nikaya commentary which had something to say about the meaning of “crop-eating cattle”. This gives you an idea how A, the Theragatha eye-witness report from around the time of the Buddha which we quoted in the beginning and B, the Buddha’s own words where understood approximately at C, the time between 100 BC – 200 AD:

…“In the same way” thus here (in this simile) ripened corn has to be seen as (illustrating) the five strands of sensual pleasure; the crop eater as the cheating mind; the crop protector’s heedfulness (or: [continuous] non-negligence = a+pamāda) as the monk’s paying attention/attending through mindfulness (lit. memory) towards the six sense doors; the stick as the suttas, the time when the oxen approaches the crops and receives a beating with the stick – that has to be understood as the time when the mind goes out and while approaching the various objects and having been directed towards (the memory of !) a sutta like “Unconceivable is the beginning of Samsara“, “The messengers of the devas“, “The house on fire“, “The simile of the vipers“, “The dangers in the future“, etc. and thus having restrained (or pulled away) the mind from the various objects descents into its (former/original) meditation object. Therefore the ancient masters said:

“When one hears the well-spoken the mind becomes pleased,
And one finds bliss and happiness on taming the mind.
Then one’s mind stops at the objects (of the senses)
Like a stick-stricken crop-eating ox.

Amazing: the suttas are the stick 😉 – maybe next time you might want to give your mind a “sound thrashing with the stick of memorized words of wisdom” when it tries to “intoxicate itself with the five sense pleasure” swaying away from the object of meditation. Who knows, you might find that your mind “settles inwardly, grows steady, unified and concentrated” 🙂

(1) this verse seems to equate sarati = āvajjati. An interesting detail to better understand how the faculty of memory was perceived in the early Buddhist (meditative) context (and supports some of the recent observations made in this blog regarding the interpretation/role of sati)

(2) nigaṇhati = lit. “taking down”. The context in the Buddha’s simile in SN 35 (see above) explains the “taking down” in describing how the “cowboy” would “pin down” the oxen before beating it with a stick: “Nāsāyaṃ suggahitaṃ gahetvā uparighaṭāyaṃ suniggahitaṃ niggaṇheyya – Having grabbed it firmly by the muzzle, he would pin it down by the forehead“. A similar passage occurs in MN (PTS 1.137) in the “snake simile”: Tamenaṃ ajapadena daṇḍena suniggahitaṃ niggaṇheyya. Where the snake is being pinned down with the help of a U-shaped stick. In both cases the “wild animal” (here the mind) is being “brought to a hold” with the help of a tool (memory of the Dhamma) and allow it to settle down, calm down, experience samādhi. 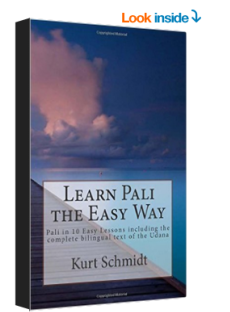