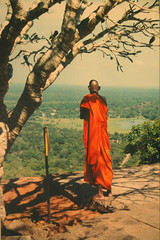 One of the better known parts of the famous 5th century Buddhist compendium “Path to Purity” by the scholar monk and commentator Ven. Buddhaghosa deals with concentration meditation and the steps necessary to get meditation instructions from an experienced teacher.

The Path to Purity or Visuddhimagga is by many considered to be the main Theravadan authority when it comes to interpreting the teachings of the Buddha or dealing with abstract philosophical concepts.

But, very much like the commentaries themselves, the Visuddhimagga recorded many stories and practical knowledge of ancient meditation masters – information which is hidden (or better: mixed into) in the dry scholastic book, buried in-between long and boring theoretical exegesis.

Especially Buddhaghosa’s detailed summary of sources regarding tranquility meditation played and plays an important part – not just in Theravada meditation and its modern revival – but also other Buddhist schools like ZEN, which heavily borrowed on the pragmatic knowledge found in this first Buddhist “textbook” on the “Path to Enlightenment”. Did you know that?

In Vism. III, 53. which deals with the hindrances one has to overcome before successfully mastering the 4 jhanas, Buddhaghosa relates a story from the past – a story of a famous young monk.

Let me share this story with you, as it allows some interesting observations which may not be too obvious if you read the story at first. The story goes like this:

In the Great Monastery [Mahavihara] too the Elder Tipitaka-Cula-Abhaya had the golden drum struck, saying: “I shall expound the three Pitakas in the circle of [experts in] the Five Collections of discourses”, and this was before he had learnt the commentaries.

Let me equip you with some cultural context real quick: Monks in those times (we are talking probably about pre-C.E times here) were supposed to learn not just the Buddhist scriptures but also the commentaries. You were only supposed to be able to “explain” or “interpret” or “understand” the teachings of the Buddha if you had learnt not just Buddha’s words by heart but also the Grand Old authority, which were the Commentaries, handed down alongside the original discourses of the Buddha. So, what this young monk proposes here, sounds like a sacrilege. Let us see what happened next:

The community of the Bhikkhus (monks) said: “Which teachers’ teaching is it? Unless you give only the teaching of our own teachers we shall not let you speak”.

Well, that sounds like some people really got upset 🙂 . Of course, as a monk in an oral tradition, he was supposed to conserve and continue handing down what was heard before and not – like the Mahayana – change teachings by himself. Again, one of the core values in Theravada, was the respect and effort to preserve the teachings of the Buddha as authentic as possible. The young monk’s idea to explain their meaning by himself sounded like a threat. What happened next? Well, on the ladder of escalations he had to report to his teacher:

Also his preceptor asked him when he went to wait on him: “Did you have the drum beaten, friend?” – “Yes, venerable Sir” – “For what reason?” – “I shall expound the scriptures, venerable sir” – “Friend Abhaya, how do the teachers explain this passage?” – “They explain it in this way, venerable sir” – The Elder dissented, saying “Hum”. Again three times, each time in a different way, he said “They explain it in this way, venerable sir”. The elder always dissented, saying “hum”. Then he said: “Friend, your first explanation was the way of the teachers. But it is because you have not actually learnt it from the teachers’ lips that you are unable to maintain that the teachers say such and such. Go and learn it from our own teachers.” – “Where shall i go to, venerable sir?” – “There is an Elder named Maha-Dhammarakkhita living in the Tuladhara Mountain Monastery in the Rohana country beyond the Mahaveli river. He knows all the scriptures. Go to him.” – Saying ‘Good venerable sir’, he paid homage to the Elder. He went with five hundred bhikkhus to the Elder Maha-Dhammarakkhita and when he had paid homage to him, he sat down.

Now it is interesting to see, that the explanations of this young monk (we learn a little bit later that they come from his own personal experience) are essentially in line with what the monks regarded as the “tradition of the teachers”. But, they were in his own words and while he, speaking out of his own experience, was able to expound the teaching of the Buddha by his own practical insights, his teacher did not let him go.

This is quite an interesting observation itself, although mainly historical. But even in the suttas we find episodes during the lifetime of the Buddha where his pupils were anxious not to mis-represent Buddhas teachings when discussing with other faiths or interested lay people and would come back to the Buddha and ask in his presence whether they cited him word-by-word in a correct way, making sure they would NOT JUST interpret the meaning or essence correctly but also use his way of explanation / systematic approach. It was probably partially due to keeping the Buddha’s teaching clear and not mis-representing it, but also necessary because in an oral tradition of conserving someone’s ideas and sayings one had to be extra careful to hammer the words of someone’s idea into granite, that is memory (on hearing it the first time). A feat which our minds used to the digital age of blabbing and waffling and forgetful super-superficial knowledge can only wonder at 😉

But, be that as it may, this is not the reason for this post. The most interesting part comes, when we follow this young monk on his journey to “learn the proper voicing of meaning (and, if available, personal experience)” in accordance with an established tradition – doing so in contrast to maybe an existing personal experience but coming up with a complete new conceptualization which might lead to further confusion. (In our eyes, we would probably have allowed this monk to skip this intellectual burden. Practice goes before learning. Realization before repetition. Why would an enlightened one have to learn to express himself properly? In a very Theravadan like tradition, where the existence of the Buddhist teachings depended (or was perceived to depend) on a correct transmission of the words of the Buddha, the community wanted to make sure, that besides personal experience the teachings survive uncorrupted. This seams to be a major difference with regard to Mahayana or other Buddhist schools). Enough of this old theme, here the story continues:

The Elder Maha-Dhammarakkhita asked: “Why have you come?” – “To hear the Dhamma, venerable Sir” – “Friend Abhaya, they ask me about the Digha and the Majjhima from time to time, but i have not looked at the others [parts of the Tripitaka, that is] for thirty years. Still you may repeat them in my presence by night and i shall explain them to you [according to the commentaries] by day.” – “Good, venerable Sir”, and he acted accordingly. The inhabitants of the village had a large pavilion built at the door of his dwelling, and they came daily to hear the Dhamma. Explaining by day what had been repeated by night, the Elder Dhammarakkhita eventually completed the instruction.

Another historical piece of information: The villagers did not listen to the actual teaching or transmission of the pali texts which were recited in the night, but rather came during the day to listen to the explanation of those teachings, for, as you may know, the commentaries where not handed down in Pali (Buddha’s language) but in Sinhala (or any native language). This way, the monks kept the original Buddha-word in memory but allowed the meaning and explanations to be made easily understandable even to the lay people who may have had no knowledge of Pali (even though at that time the languages where so close related that Pali may have sounded like Latin to a middle-age Florentine)

But at this point the story takes an interesting turn. Here it comes:

The Venerable Dhammarakkhita [the teacher] sat down on a mat on the ground before the Ven. Abhaya and said: “Friend, explain a meditation subject to me”. – “What are you saying, venerable sir, have i not heard it all from you? What can i explain to you that you do not already know?”

Isn’t that just beautiful? 🙂 Now, this young monk was sent here, after some personal meditative breakthrough, probably practicing insight meditation. Suddenly, looking back at the Buddha’s words he had memorized, everything seemed to make sense and fall in place, so he beat the drum to share some of his understandings with his fellow monks only to find out that they were reluctant to grant him the status of a teacher and made his preceptor send him on an “extracurricular course” so that if he was going to explain the Buddha’s words he would at least use the same repartoire as tradition saw fit, and not interpret the Dhamma through his own experience (which, most Buddhist schools did, and if we look at ZEN, saw as the pinnacle of a teachers capabilities). No, not here. So off he goes, humble, learning from another accomplished “book monk” even the traditional way of explanation only to find out that this monk had never been able to actually REALIZE what he memorized.

In the happy end of this story, which the completely scholastic Visuddhimagga preparing Buddhaghosa does not hide or does not change, it is REALIZATION which is paramount and celebrated in these lines:

“What are you saying, venerable sir, have i not heard it all from you? What can i explain to you that you do not already know?” 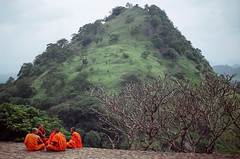 The senior Elder said: “This path is different for one who has actually travelled by it.” The Elder Abhaya was then, it seems, a Stream Enterer. [Tato naṃ thero añño esa, āvuso, gatakassa maggo nāmāti āha. Abhayathero kira tadā sotāpanno hoti]

When the Elder Abhaya had given his teacher a meditation subject, he returned to Anuradhapura. Later, while he was expounding the Dhamma in the Brazen Palace, he heard that the Elder Dhammarakkhita had attained nibbana. On hearing this, he said: “Bring me my robe, friends”. Then he put on his robe and said: “The Arahant path befits our teacher, friends. Our teacher was a true thoroughbred. He sat down on a mat before his own pupil and said “Explain a meditation subject to me”. The Arahant path befits our teacher, friends”. For such as these books are no impediment.

Translation of the Vism. used:

Some excerpts from the Visuddhimagga.

Looking to buy a copy of the Visuddhimagga?

The breaking of a strong thought