Even at Buddha’s time insight meditators went through times of doubt regarding their meditation practice. In 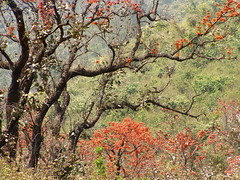 the following case one monk thought he might simply ask his fellow monks how they practice and solve his own uncertainty. Unfortunately, they practiced differently. What was he to do?

Read this nice episode found in the Samyuttanikaya; it has a happy end:

He then asked the other monk: “How, now, dear brother, is one’s insight-vision very clear? (Or: how does my seeing/bare awareness/attention has to be. How do i need to observe in order to make progress?)” – “When you, brother, perceive [*NOTE BELOW] the rising and falling of the six sense realms as they become/as they are, then, o dear brother, such monk’s insight-vision is all cleared.

However, the monk was not satisfied with this response and went to his next fellow-ascetic…only to get a complete different answer. Lets not repeat the whole text here, because even the second answer dissatisfied him and he continued getting expert tips from a couple of meditating monks. In the end he was completely confused. Lets list all expert responses on what would make our insight vision an excellent one:

Now lets study this neat list of vipassana instructions. It is hard to say whether those developed over time and all derive from the Buddha or whether the Buddha used all at the same time just applying them to different characters/tastes. All of them share the following strong similarities:

In each case the activity involved is pajānāti – to perceive/know/mentally see one or the other ‘object’ in a way or in the manner of yathābhūtaṃ. This term, as we saw here, usually translated as ‘as it really is’ and that being not a wrong translation but it too has a literal nuance of ‘as has become’, ‘as came into being’ which seems not unimportant in the context of insight meditation.

Especially when we have a look at the various ‘objects’ stated as valid insight meditation topics: all of them describe our experiential moment-to-moment reality in certain ‘categories’ which all imply motion. A rising and a falling. A coming and a going. Not just in spatial terms (sound coming from a bird behind me) or time (sound coming and going over time) but at a deeper level even depending on consciousness itself…no consciousness there, no one knowing, then no ‘being’. But that is something for your meditation cushion.

Now all listed methods seem to be set up in the same way, except for the objects they ask the meditator to observe. That is probably giving our newbee vipassana monk a hard time. How to solve this? Meditate all at the same time? One after the other? One in the morning, one in the evening? Or create a new one according to personal tastes? All wrong! Before we show Buddha’s answer to this tricky question, lets quickly make sure we are all on the same page and go through those objects once again:

If you compare your own personal vipassana instructions (be it Mahasi, Pa Auk, Goenka, Nyanananda etc. etc.) with this list you would probably find yourself in either group number 4 using some kind of label or you would use 1. or 2. derived from or combined with using labels.

Not going into details, but there are quite some techniques out there which do forget that it is NOT JUST the object of concentration but the manner in which the objects are noted which is quite (shall we say, even more?) important. See the above paragraph where we dwelled a little bit on the similarities between these descriptions but we will make this maybe a separate posting another time. Just to close this second off-topic remark: Mental chatter, whatever the content be, is not “yathabhuta pajanati” but often conceived as such. Beware of the content, it catches you and invites you to take a rest on something.

Let us listen to how the Buddha resolves this “insight meditation technique competition”:

As he was sitting there he [reported to the Blessed One his conversations with the other monks. The Blessed One then said:]”Monk, it’s as if there were a man who had never seen a riddle tree (lit. ‘What is this’ – tree). He would go to another man who had seen one and, on arrival, would say to him, ‘What, my good man, is a riddle tree like?”

“The other would say, ‘A riddle tree is black, my good man, like a burnt stump.’ For at the time he saw it, that’s what the riddle tree was like. (Tena kho pana, bhikkhu, samayena tādisovassa kiṃsuko yathāpi tassa purisassa dassanaṃ)

“Then the first man, dissatisfied with the other man’s answer, went to still another man who had seen a riddle tree and, on arrival, said to him, ‘What, my good man, is a riddle tree like?’

“The other would say, ‘A riddle tree is red, my good man, like a lump of meat.’ For at the time he saw it, that’s what the riddle tree was like.

“The other would say, ‘A riddle tree is stripped of its bark, my good man, and has burst pods, like an acacia tree.’ For at the time he saw it, that’s what the riddle tree was like.

“The other would say, ‘A riddle tree has thick foliage, my good man, and gives a dense shade, like a banyan.’ For at the time he saw it, that’s what the riddle tree was like.

“In the same way, monk, however those intelligent men of integrity were focused (yathā yathā adhimuttānaṃ) when their vision became well purified is the way in which they answered. (Transl. by Bh. Thanissaro, SN 35, 204) 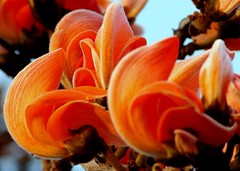 So the Buddhas answer is a very interesting one, and the simile has a humorous overtone. The tree, which dramatically changes it appearance over the course of the year ( Butea frondosa ) was called a “What is this tree” or Kimsu-ko tree, in Pali. That is beautiful: We may ask: What is this name and form and consciousness? How can we “name” and “label” it properly for others to understand what we mean, if it changes so dramatically. We could rightly call this mind a “What is this” – mind.

It is not easy, coming up with a systemization of such an illusive process as the perception of our world and how we identify from moment to moment and proliferate into concepts, thought-constructs and finally views. Buddha’s great achievement as a very good teacher was in part that his Dhamma made it easy for many to immediately get a very good understanding of what he was talking about. Even though talking about most subtle things.

Therefore, when we go back at the list of those 4 different objects, the Buddha asks us to “judge” them as essentially the same. He gives a hint towards the fact, that those categorization of the perceived “world” may just differ in a “temporal” perception of basically one and the same process / thing: The process we experience and the perception of our world in each moment.

In our vipassana practice we could start with simple tags like “whatever arises will vanish” noting whatever arises to our attention and immediately see, when doing it, certain facts which we did not realize before. Just by repeatedly stopping and thus prolonging a sense processing sequence we allow this direct insight to grow into “wisdom” of what is really going on.

Applying this perceiving process of noting to whatever arises we eventually will witness the workings of illusive elements which are hidden behind form and are “sensed” only trough the poking of many sense impressions, or get to see feelings and perception and thoughts arise and pass away individually. Or we might even break down the frame rate further and perceive the six sense realms in yet another level of observation of the one and same tree changing its appearance.

Moral of the story: Make sure that the fundamentals of your technique (yathābhūtaṃ pajānāti) as such are correct and whatever is the object of your insight meditation will play only a secondary role (and, like in this case, may just be related to how quick or slow your “swing-by” in the moment was).

* perceive – seems like good translation for ‘pajānāti’. Using this one the noun pannya would than become ‘Perceiving’ instead of ‘Wisdom’ … that makes so much more sense… the English word ‘wisdom’ sounds like an old man’s experience…but that is clearly not meant by Buddhist pannya. This context makes it clear that pannya, or ‘wisdom’ in the Buddhist sense is a direct ‘perceiving’ of reality – not perception though, perceiving, or the ability to perceive.